Chick-fil-A Has Doubled Its Sales Despite Increased Protests 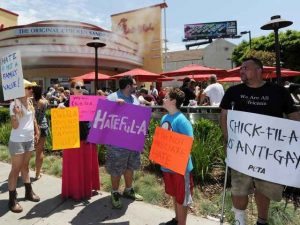 Although protests against Chick-fil-A have popped up on campuses and in cities around the country this year, the chain has more than doubled its sales in recent years, reaching $10.5 billion in sales and adding 700 new locations.

Protests against Chick-fil-A began around 2011 when Chairman and CEO Dan T. Cathy voiced support for traditional marriage. Since then, protests against the fast-food chains have taken place around the country.

Most recently, faculty at the University of Kansas called for Chick-fil-A to be banned from campus, calling the chain a “bastion of bigotry.” Last week, faculty and students at Purdue University called for a similar ban on the chain.

Despite the protests, Chick-fil-A has experienced massive growth since 2011. A new report from the Lafayette Journal & Courier claims that the chain has doubled its sales since 2011, reaching $10.5 billion in revenue and adding 700 locations. Now, Chick-fil-A is the third-largest fast-food chain after only Starbucks and McDonalds. There are only 2,400 Chick-fil-A restaurants compared to more than 14,000 Starbucks locations. In a 2018 survey, American teenagers ranked the chicken-based franchise as their favorite fast-food chain, stealing the top spot from Starbucks.

In July, analysts at Goldman Sachs revealed that Chick-fil-A is the fastest-growing fast-food brand in America. “Our brand survey shows that Chick-fil-A has had the most brand momentum across [fast-food restaurants] — supporting the most increase in total revenue (in dollar terms) in the US,” the analysts wrote. “Steer clear from those in the fray of Chick-fil-A,” the analysts added. “Our 2,000-consumer brand survey suggests they will continue to take share and grow.”

Chick-fil-A’s success is surprising to many analysts considering that they unlike other chains, are closed every Sunday. Faith has been at the center of the Chick-fil-A organization since its founding in 1946. The Chick-fil-A website claims that they close on Sunday to allow their employees to rest and worship.

“Truett saw the importance of closing on Sundays so that he and his employees could set aside one day to rest and worship if they choose — a practice we uphold today,” Chick-fil-A writes on its website.