A window into the self-absorbed hipster, Obvious Child is painful to watch 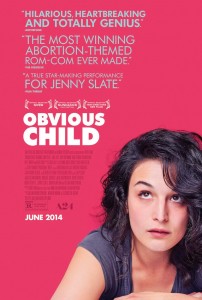 (WNS)–Obvious Child is an independent “romantic comedy” starring internet darling and brief Saturday Night Live cast member Jenny Slate as Donna, a stand-up comedian living in Brooklyn who has a one-night stand that turns into a pregnancy. Unlike the moms in the hits Juno or Knocked Up, Donna quickly decides to have an abortion.

“I’m pregnant and I’m having an abortion,” a teary Donna tells her Manhattanite mom late in the film.

“Thank God,” the mom replies. “I thought you were going to tell me you were moving to L.A.”

Even in Manhattan, very few people in the theater laughed. The abortion aside, the comedy is painful to watch. (Its R-rating applies mostly to the crude comments from Donna.)

The film, which scored the highest per theater earnings in the country in its very limited initial release in New York and Los Angeles, has received positive reviews presumably for its “bravery” of showing a woman having an abortion instead of a baby. Making a moving, realistic movie about a woman getting an abortion is theoretically possible; after all, at least a million children are aborted in the United States every year. That movie wouldn’t be a romantic comedy. In this “abortions have a happy ending” story, Donna finds approval for her decision from all of her family and friends, and her one-night stand turns into real romance. The father, Max (Jake Lacy), shows up outside her house with a bouquet of flowers to go with her to her abortion appointment. The film closes with Donna, post-abortion, curling up with Max to watch a movie.

Unlike Juno MacGuff, Obvious Child’s Donna never wonders what stage of development the baby is in or whether to abort. When Donna’s friend recounts when she had an abortion, Donna asks if she had regrets. The friend says sometimes “I feel sorry for my teenage self.” In one reading, this is a film about self-involved millennials, like Lena Dunham’s show Girls. Both Girls and Obvious Child take place in Williamsburg, the ultra-hipster neighborhood of Brooklyn, and center on single 20- and 30-somethings (my generation).

In Girls, I can never tell if Dunham is critiquing the self-involved world of 20-somethings or if she is telling everyone else to understand and accept millennials for who they are. The same is true here with Gillian Robespierre, the writer and director of the film. Donna is a realistic character who makes terrible decisions, who isn’t successful in her career, who shares awkward details about her relationships in her stand-up routines, even announcing her decision to have an abortion from the stage. Donna is also the embodiment of the millennial tendency to act as if nothing is a big deal: She affects ambivalence about both the thrift store sweater she wears and her decision to have an abortion. Apparently if you act like a millennial, you live happily ever after—an ending even Lena Dunham doesn’t allow on her show.

Despite Obvious Child’s attempt to be a gritty, independent film, the realism is limited to Donna’s millennial attitude. Here Juno distinguishes itself again. Juno, which won an Oscar for best original screenplay, allowed its story to remain first. The writer, Diablo Cody, wasn’t a pro-life lobbyist with a checklist. But in Obvious Child, the story is reduced to a Planned Parenthood public service announcement. Planned Parenthood’s logo even appears in the abortion center scenes, on bulletin boards or wall hangings, like a product placement.

The dialogue, usually believable, turns staged when the abortion issue comes up, checking off all the “Frequently Asked Questions” about abortion: Does it hurt? (No!) Is the recovery difficult? (No!) A Planned Parenthood employee explains to Donna how much abortions cost and then adds that there is financial assistance for those without means. No wonder Planned Parenthood and other abortion groups are promoting the film. The organization said it “consulted closely” with the filmmakers and it shows. Robespierre not only misfired with her message; she made a bad film.