Brussels, Belgium (ANS) – An American Christian businessman, Pat Alley, had a miraculous escape from death on Tuesday, March 22, 2016, during the terrorist attack on Brussels’ Zaventem Airport, which was part of double-throng assaults on the airport and metro that killed 31 and wounded at least 230.

Mr. Alley, President/CEO of Cade Creek Homes LLC., of Pagosa Springs, Colorado, had just arrived at the airport, and had gone through customs, when two blasts ripped through the building and, despite being close to explosions, he miraculously escaped.

Mr. Alley vividly described what occurred to long-time friend, Gordon Howie, an author and CEO of Life and Liberty Media, who shared part of the conversation on the rightsidesd.com website. 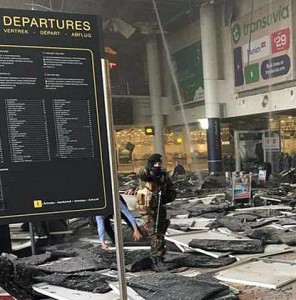 The Christian businessman told Mr. Howie that he had travelled to Brussels to meet a Jewish businessman he had met a few weeks before in Ghana, so they could discuss a “joint venture” with his company in the west African nation.

“I had just gone through customs and was in the receiving hall looking for my friend who was to pick me up,” said Mr. Alley. “I had been waiting in a coffee shop when I decided to get up and go around the corner to check on something and, as soon as I did (5 seconds) there was an awful sounding explosion behind me and dust, concrete and debris were everywhere, as well as people running and screaming, and lots of blood! Within a few seconds of the first came a second blast!”

Mr. Alley described it as a “great compression in the building with all windows blown out.”

He went onto say, “People were running, screaming, shaking. I happened to be pretty calm and asked them where they were running to and told them that we needed to find an exit out and not just run. At that time, an airport security person came running by and led us to a back stairwell where we went down two-three flights to the outside.

“Of course, I did not realize the gravity of the situation until I was outside and, even then, I did not know that so many people had been killed. It seemed like it was exactly where I had been seconds before I had left the coffee shop, but it was in the check-in hall just above us and the force was so much as to blow all the ceilings out above us! Thousands of people were gathered in the streets outside on that cold day in Brussels.”

He went onto say, “I just thank the Good Lord for always keeping watch over me as this was another amazing day in my life. I believe I have been called to Africa by the Lord to help His people there. For seven years I have followed what I believe is His calling on my life for my final frontier!

“I truly believe that the Lord protected me so I could continue His work with His people, not only to help them with their agriculture and housing, but also in their walk with our Lord. We are not to be discouraged as God will open the right doors for us if we continue our walk.” 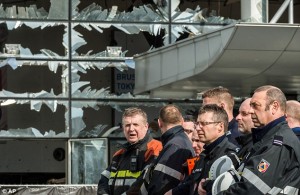 According to another close friend, Rick Reding from Colorado Springs, Pat Alley is in his early sixties and is married to wife Marge, and they have three grown-up children, Clint, Heather and Nickie.

He shared with ANS, the e-mail he received from Pat Alley, shortly after the attack. It read, “WOW! what a reception, as the suicide bombers were just a few feet from me!! I had just walked around the corner from where it happened at the Brussels Airport, but God is watching out for me. I am OK.”

Mr. Reding then said, “I first met this fine Christian businessman when he had a construction company in Black Hills, South Dakota, and I was working on producing books in Russia,” Reding told me in an interview. “He became a close friend and even paid for the paper for the printing of some of the books.

“Pat has since moved to Pagosa Springs [located within the San Juan National Forest amid the majestic San Juan Mountains], and has building projects in Ghana, Nigeria, Cameroon and Senegal. He was raised in a farming community and so is now helping the people of Africa by advising them on farming and helping them with his building skills.”