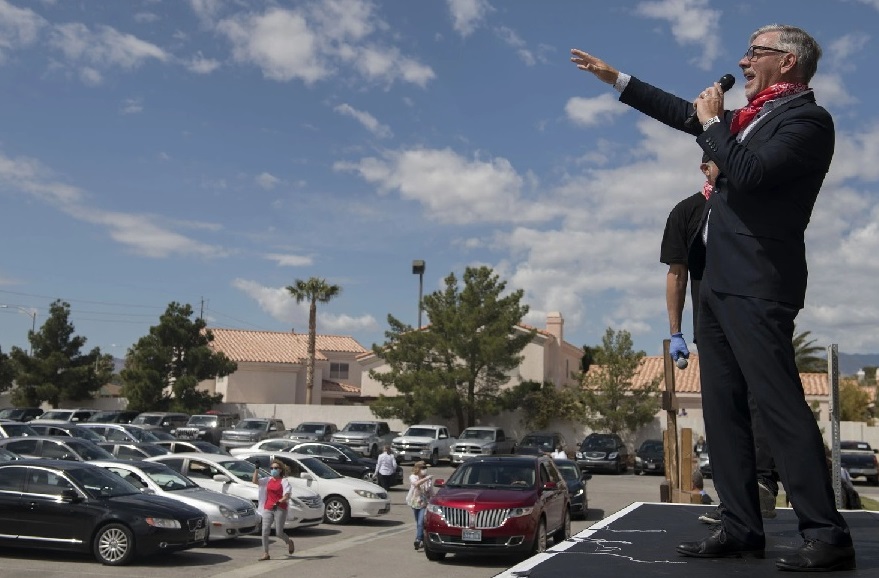 Pastor Paul Goulet leads a drive-in Easter service amid the coronavirus pandemic at the International Church of Las Vegas in Las Vegas, Nevada

A national Christian conservative legal nonprofit is calling on churches nationwide to resume in-person worship services on May 3 while following appropriate safety protocols, arguing that “now is the time to act” after weeks of in-person services being suspended due to COVID-19.

The Liberty Counsel this week announced an initiative called ReOpen Church Sunday, encouraging churches to open their doors on the Sunday before the National Day of Prayer observance on May 7.

In a website for the campaign, the legal center contends that churches are “more essential than ever” but must be reopened with “appropriate measures of sanitization and appropriate social distancing between families.”

“We chose May 3 because it is part of that phase one of the ‘Opening America Again’ [proposal] that the president (Donald Trump) issued as guidelines,” Liberty Counsel founder and attorney Mat Staver told The Christian Post. “That actually begins on May 1 and that is the first phase of the three-phase program and churches are included in that phase.”

The president’s proposed guidelines identify places of worship among venues that should be allowed to reopen under phase one of the reopening process as long as they “operate under strict physical distancing protocols.”

Staver said May 3 was the date chosen because it is the beginning of the National Day of Prayer week.

For years on the Sunday before the National Day of Prayer, there has traditionally been a public Bible-reading marathon on the steps of the U.S. Capitol. But the COVID-19 pandemic has forced organizers to reschedule the marathon for September, Staver said.

“It is a good time to set as a target for the beginning of the reopening of churches and we’re recommending that churches consider several options,” he said.

Staver hopes churches will try “all of those” options so they can attract a variety of different people.

“You want to limit the size of the attendance at the church through social distancing,” he explained. “Some people won’t be able to get inside the church, some people may not want to go inside the church. The other option to happen at the same time is a parking lot service. Those people in the parking lot can participate in the worship service that’s being done on a limited basis inside.”

“Then those who are unable or they need to stay home for various health reasons or age reasons or any other reason can participate online. So it’s a great time to get that community back together and to start that reopening process.”

As church gatherings have on multiple occasions been blamed for surges in coronavirus infections, Staver said the new campaign is not asking churches to “pack people into a church like sardines.”

He said churches are in the best position to determine how to go about reopening for live in-person services. To assist churches, Liberty Counsel plans to post guidelines and suggestions on ReOpenChurch.org.

“People can follow different ideas there. We are going to ask for people’s ideas about what they have been doing,” Staver said. “I think it’s way past time for churches to begin the process.”

“Originally, they said to churches that ‘it’s only two weeks.’ Then that two weeks went to four and then six and then two months. Now for some people, that may push to three months. There’s never an end in sight.”

The announcement of the ReOpen Church campaign comes as there is uncertainty or doubt that state and local stay-at-home orders banning large gatherings will be lifted by May 3.

When asked whether May 3 is an appropriate timeline for the re-opening of churches, U.S. Commission on International Religious Freedom Chairman Tony Perkins told CP that it depends on the local area. “Overall, I think it is time. I think we are seeing the curve flatten out in most places. But there are still a few hotspots,” he said.

“I think that we need to continue to put a high priority on public safety and the safety of our congregations and craft a way forward that works best for them. I am hesitant because we need to be careful that we are not drawing a line, saying ‘this is the day and everybody needs to be back in their churches.’”

Some Christian leaders are skeptical of the idea of reopening churches so soon.

“My concern is many churches have spent years building trust in the community but will lose it with one decision to prematurely gather, further spreading the virus to healthcare workers and the vulnerable,” Pastor Brady Boyd of New Life Church in Colorado Springs, Colorado, wrote in a tweet. “Let’s be in our cities for the sake of our cities.”

Jeffrey J. Barrows, the senior vice president of bioethics and public policy for the Christian Medical & Dental Associations, told CP in a statement that churches that ignore government social distancing orders during the pandemic by gathering together “are placing their congregants at increased risk of SARS-Co-V-2 (COVID-19) infection.”

“We recommend that all churches follow the guidance provided by their government officials during this unprecedented outbreak,” Barrows wrote.

Barrows warned that the current pandemic is “an example of how governmental authorities, in consultation with public health experts, are in the best position to safely recommend when and how state and local communities can resume normal activities and gatherings.” 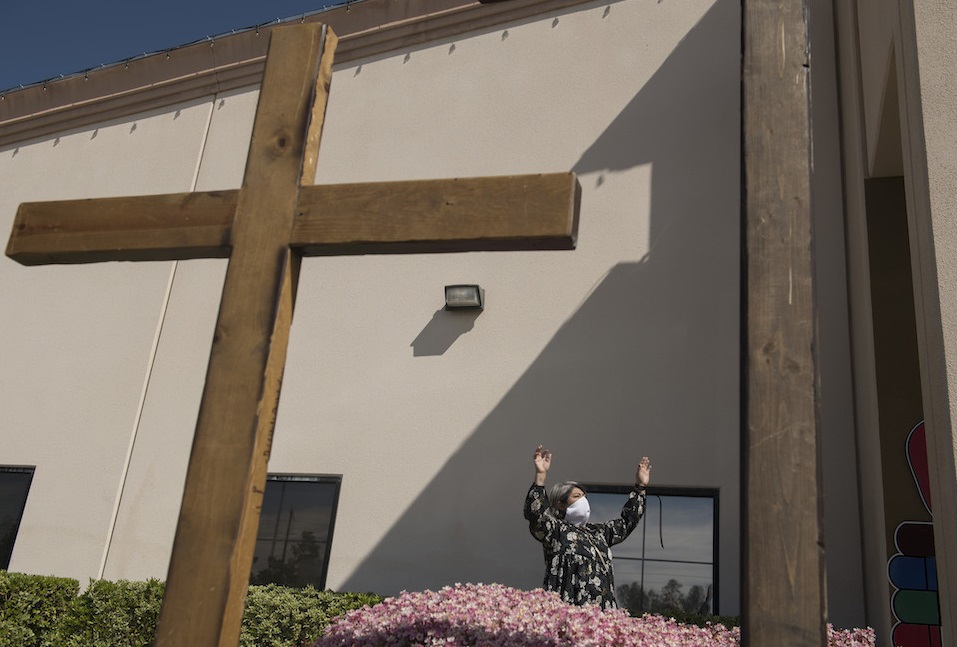 An attendee raises her hands to the sky during a drive-in Easter service amid the Coronavirus pandemic at the International Church of Las Vegas in Las Vegas, Nevada on Sunday, April 12, 2020.

CMDA is a national association of Christian health care professionals with over 19,000 members.

“CMDA … recognizes the importance of churches gathering together for worship, teaching and fellowship,” Barrows said. “CMDA also acknowledges that God has commanded His people to assemble together. However, in Romans 13:1-2, God commanded Christians to obey the government authorities He has established over us.”

Staver argued that most governments have determined that churches are not “essential” services but other things like liquor and retail stores are essential. As several lawsuits have been filed across the country against social distancing orders banning worship gatherings, he warned of the religious freedom implications of such government demands.

“There are all kinds of bizarre restrictions that, frankly, violate the First Amendment,” he contended. “None of those restrictions, I think, were constitutional to begin with. Those restrictions are being challenged. We’re challenging some. But I think we obviously have to balance health and safety. But at the same time, churches are very essential. They always have been, and they’re more essential now than ever.”

Staver criticized the fact that in many places, people are allowed to flock to stores like Home Depot or K-Mart but can’t attend worship services.

“Home Depot doesn’t have a constitutional right to exist and nobody seems to have a problem with it [being open],” he said.

Staver said the initiative has been met with a lot of “enthusiasm” from people who say they are ready to go back to church.

“We have pastors that have been praying about when they would turn that corner,” he said. “Amazingly as I am talking to some, they independently picked May 3. That is the timeframe that they wanted to turn the corner and reopen the church.”

Staver said that it is too early to tell how many churches will reopen on May 3.

Caption: An attendee raises her hands to the sky during a drive-in Easter service amid the Coronavirus pandemic at the International Church of Las Vegas in Las Vegas, Nevada, on Sunday, April 12, 2020