(WNS)–In a handheld video taken April 17, World Vision national director José Luis Ochoa gestures toward a tent standing on the tarmac at an airport in Portoviejo, Ecuador. The tent hums with the sound of families, and in the lower corner of the frame, a woman snuggles a young child, both of them surely seeking comfort. 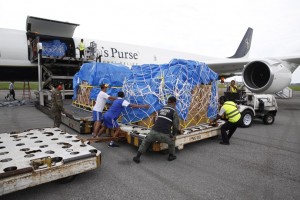 “What you can see behind me is a shelter where we are helping people who have lost their homes,” Ochoa says in Spanish. “World Vision installed the tent and provided vehicles to bring mattresses and towels in coordination with other organizations.” As relief efforts drag on for days in Ecuador, with families stuck outside in muggy conditions, safe shelter has become one of the biggest needs.

On the night of April 16, a magnitude-7.8 earthquake struck along the South American country’s Pacific coastline. So far, at least 413 people have died. Rescue crews are frantically searching for survivors buried in the rubble.

Christian aid groups are responding to the devastation with emotional, physical, and spiritual support. World Vision, which has worked in Ecuador since 1978, plans to provide places for kids and young adults to access psychosocial care and mitigate emotional distress. On Monday, the organization’s staff distributed bottled water, diapers, toilet paper, noodles, cans of tuna fish, and toys and art supplies for young children. In coming days, they plan to hand out kitchen supplies, mosquito nets, and water treatment systems.

“All of our sponsored children and staff are safe and have been accounted for. We are very grateful for this news!” World Vision spokeswoman Laura Blank told me via email. 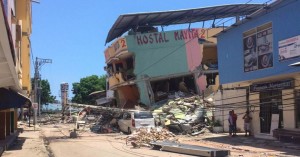 Caption: Over 13,000 Compassion-assisted Children live within a 30-mile radius of the epicenter of the devastating earthquake that struck Ecuador on Saturday night

Herb Ehresman, with Compassion International, said his organization serves 75,000 Ecuadorian youth, with 13,000 located in the six regions affected by the earthquake. But since Compassion’s ministry model is to equip local churches, its first responders and primary sources of information in disaster situations often are the people directly affected.

“I would ask for special prayer … those first responders, our churches, are also victims in this case,” Ehresman said.

On Sunday, while most Americans were just learning of the earthquake, Samaritan’s Purse sent a group of seven, including medical personnel, to partner with local churches and personnel on the ground. More deployed yesterday and today and will work out of a clinic funded by Samaritan’s Purse in Portoviejo.

Four area hospitals were either damaged or destroyed in the earthquake, so the group’s first priorities will be providing emergency medical care for survivors and selecting a site for an Emergency Field Hospital.

“It’s much more than tents,” Vice President Ken Isaacs said of the facility. Once assembled, the Tier 2 surgical hospital will have a floor, two sterile operating rooms, 42 beds, laundry facilities, and even air conditioning—covering nearly an acre.

A setup crew has been practicing unpacking and constructing the massive facility in a North Carolina warehouse for more than a year. Staff will transport it to Ecuador on Wednesday morning in a DC-8 cargo plane owned by Samaritan’s Purse.

“This will be the most extensive one we’ve ever put up,” Isaacs said.

At least one faith-based organization plans to skip the long trip via air, water, and roads of questionable condition in favor of sending cash directly to contacts in the country. Convoy of Hope is based in Springfield, Mo., which is also the headquarters for the Assemblies of God. In order to be more efficient when disaster strikes, the organization often partners with Assemblies of God missionaries already on the ground. Sending food and supplies would take too long, up to six weeks, explained spokesman Jeff Nene. Neighboring countries and others in the region, including the United States, already are airlifting supplies that can be used immediately.

The common thread among all four Christian organizations will be coordinating efforts to meet a need far greater than any one of them could meet alone. While the official number of wounded stands at 2,500, the actual number is probably much higher, Isaacs said. He cited the city of Pedernales, with a population of about 50,000, in which an estimated 80 percent of buildings collapsed after the quake.