Christian Men are Asking, “Is This All There Is?” 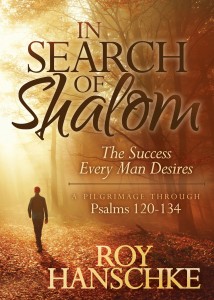 DENVER, CO (ANS) — In an upside-down culture that attacks the value of men, even Christian men are losing a sense of their God-given worth. Many are looking at their commonplace lives wondering if this is all there is. They desire to make a significant spiritual impact on their families, their neighborhoods, places of business and churches. However, that goal seems unattainable. It’s just a dream. However, that goal doesn’t have to be just a dream. It can be reality.

In his book, In Search of Shalom: The Success Every Man Desires, author and broadcaster, Roy Hanschke, invites men to experience the reality by taking a pilgrimage through Psalms 120 to 134, known as the Pilgrim Psalms or the Psalms of Ascent. The goal of the search is “shalom” which represents completeness, tranquility, harmony, vitality and restored relationships. It’s the fullness of life as God intended it to be. Once discovered and embraced shalom becomes the key to attaining the goal.

Using the Pilgrim Psalms as a guide, the reader encounters God’s instructions for experiencing shalom. He learns about the importance of seeing God as his keeper, the value of involving himself in a community of men, knowing how to overcome contempt and abuse from and toward others, the importance of confession and how to simplify his life for greater effectiveness. He becomes a new man, much more confident in his role as a man of God. The lessons in each chapter may seem simple, but they take a man deep into an understanding of God and himself. The fun part of the journey for Hanschke was the surprise that came to him in writing the final chapter (Psalm 134).

Hanschke began a study of the Pilgrim Psalms four years ago and never intended it to become a book. The more he studied these Psalms the deeper he dug into them to find their meaning. After amassing numerous notes, he sensed that his discoveries were not just for him but for other men as well. For the next year Hanschke wrote and rewrote the chapters before considering the book complete.

Then the question was who would publish the book? One day while making a presentation at a writer’s conference, Roy was approached by Terry Whalin of Morgan James Publishing who offered to help him get the book published. Roy was unaware that Terry even knew about his manuscript. The process began, the publishers saw the value of the book and it was recently released for distribution on line, through Roy’s website and soon-to-be in bookstores.

At his speaking engagements, Hanschke tells the story about how he was convicted by reading his own book. He recounts that one day after finishing the book, he decided he should read it as a reader rather than the writer. When he came to the part about “stealing peace” God spoke to him. He wrote that it’s possible that a man who is seeking to bring peace (shalom) to his family might actually be stealing peace from the family. Roy says that at that moment the Holy Spirit made clear to him that he was stealing it from his family. He realized that by the way he tends to react to frustrating circumstances he creates an atmosphere of unrest in the home. Rather than bringing shalom to his home, became aware that he was stealing it.  He confessed his sin to both God and his wife seeking God’s help in making some changes. According to Hanschke, this has made a noticeable difference in his home-life.

Hanschke’s desire and prayer is that his treatment of the Pilgrim Psalms will bring restoration, refreshment, and renewal to men and that the journey will rekindle the fire that once burned inside them in a new way.

In Search of Shalom is short and to-the-point (just right for most men) and intended for use by one man, a group of men, for a father and son or just a few friends.

You can find more about Roy Hanschke, his book, and his speaking ministry. at www.howdidimissthatmm.com.