Wide receiver Joe Anderson was signed by the New York Jets December 22nd, about six weeks after he stood outside a Texas stadium with a sign asking for an NFL job.

Dressed in a red sleeveless tee-shirt that displayed rippling biceps, the 27-year-old held up a sign outside the stadium that read: “Not homeless…but STARVING for success!!! Will run routes 4 food #Whateverittakes #Underdog #I believe #Hungry. 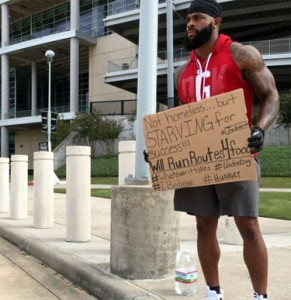 When he posted a photo of himself on Instagram holding the sign, it quickly went viral. “Lord it’s all in your hands, all I know is that I believe it by faith and see it all happening even when it looks like a joke before the eyes of man!” he wrote on his Instagram post.

Anderson continued to exalt the Lord in his post. “I fill myself with humility and say let your Will be done and use me to allow others to believe in your power!!!! I’m not looking at my situation with a worldly mindset and that’s what’s gonna separate me.”

The married father of two noted it was not a publicity stunt, but he was pursuing a dream and wanted to encourage others in their journey. His faith in God upheld him in his lonely quest. “I’m not just chasing greatness for myself/family but for all the people that lack faith and wanna quit and don’t believe God still moves,” he wrote.

Echoing Romans 1:8, he stood up without shame for the Gospel: “Create and tell your testimony don’t be ashamed of it, do it all for the glory of the kingdom,” he declared.

“When I get my shot you’ll see what the Lord is truly about to do in my life and I pray with all my heart it inspires you to never give up. When your purpose means more than your situation God will give you favor.”

Anderson achieved his dream and went to his first practice with the Jets the following Tuesday, rejoining former Bears teammate Brandon Marshall.

He played nine games for the Bears in the 2012 and 2013 seasons, primarily on special teams. His 2013 season ended due to injuries that put him on reserve and he was later waived by the Bears.