Christian Persecution and the White House

In February 2012, WorldNetDaily (WND) reporter Aaron Klein reported “Several knowledgeable Egyptian and Arab security officials claimed the U.S., Turkey and Jordan were running a training base for the Syrian rebels in the Jordanian town of Safawi in the country’s northern desert region.” As it turned out, several news sources have reported that Syrian rebels who joined the Islamic State (of Iraq and Syria) (IS), were trained in 2012 by US instructors at that secret base in Syria. Jordanian officials said dozens of future IS members were trained by the US and the IS leader was released when the occupant of the Oval Office shut down an Iraqi prison in 2009. Now Christians are among those suffering the impact. 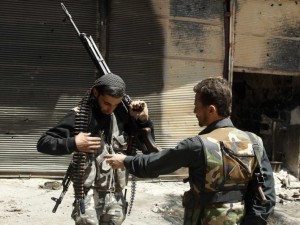 This radical militant group has swept across Syria and Iraq, invading, murdering and claiming territory. It is an al Qaeda offshoot and is attempting to establish a worldwide caliphate. In doing so, it has given an ultimatum to Christians living in northern Iraq: convert to Islam, pay the tax, or die. Reuters reports that the IS issued a statement announcing: “We offer them three choices: Islam; the dhimma contract – involving payment of jizya; if they refuse this they will have nothing but the sword.” The statement was issued in the name of the IS in Iraq’s northern province of Nineveh and had been distributed and read in the mosques in the city of Mosul.

Reuters reports the statement said Islamic State leader Abu Bakr al-Baghdadi, which the group has now named Caliph Ibrahim, had set a Saturday, July 19 deadline for Christians who did not want to stay and live under those terms to “leave the borders of the Islamic Caliphate…After this date, there is nothing between us and them but the sword.” Reuters reports that Mosul’s Christian population was 100,000 ten years ago, but because of persecution and war dwindled to about 5,000 last month before the IS took over the city. Reuters reports that a resident there said, “The vast bulk of those have since fled, leaving perhaps only 200 in the city.” A similar decree was issued in the Syrian city of Raqqa in February.

The US “president” has taken many terrible “decisions” during his occupation of the White House. In nearly any previous history of America, he likely would have been impeached, tried for treason, or even convicted of high crimes and misdemeanors. A man who says he is Christian has overseen some of the worst treatment of Christians in his own country, and has contributed to the suffering of Christians around the world. Titus 1:10 begins, “For there are many unruly and vain talkers and deceivers… ” And in verse 16 concludes: “They profess that they know God; but in works they deny him, being abominable, and disobedient, and unto every good work reprobate.” Draw your own conclusions.