Christian, you are a priest 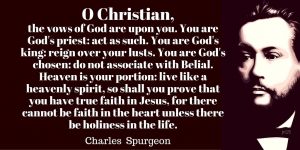 “The priesthood of all believers” is a belief that’s been repeated throughout Christendom for 500 years since the Reformers threw off the shackles of the Catholic system that required a middleman between Christians and their God. With roots in Isaiah, the idea is spelled out most clearly in 1 Peter 2. There Peter tells us that we are “living stones” being built on the foundation of Christ into a spiritual house and a holy priesthood (2:4) so we can offer spiritual sacrifices to God. He repeats this thought in 2:9, calling his recipients a royal priesthood chosen to proclaim the praises of God.

Though not using the term for priesthood, Ephesians 2:19-22 carries a similar concept to what Peter used regarding each of us functioning as stones who are being built together into a home of God in the Spirit. Romans 12:1 also hints at our priesthood in urging us to present ourselves as living and holy sacrifices. Not coincidentally, the discussion in that chapter immediately turns to serving the church (the people, not the organization), closely paralleling the wording used in 1 Corinthians 12 and Ephesians 4.

As always, the inspired writers used the words they used for a reason. “Priest” isn’t just a throwaway term. If we are all priests, it’s implied that carrying on our own private walk with God isn’t enough. It’s also implied that we all have duties to fulfill in God’s spiritual house, the body of believers we call the church. In the Law there was no place for a priest who only showed up for holy days and then went home and lived the same as everybody else. It was not enough for a priest to merely practice personal holiness.

Ask yourself: does church today look more like a priesthood of all believers, or like the model Israel had where the majority of the people went about living their own lives while a small group did the work of priests? Don’t take that as saying there are no elements of the priesthood of all believers in modern Christianity at all. Instead, I simply mean the question as it is stated: if you had to pick which model we most resemble, which would it be?

To get back to the Bible we have to go beyond giving lip service to the concept of the priesthood of all believers and start acting on it. If you are a Christian, you are a priest. Whether you’re a new Christian or an old one, a minister, elder, deacon, teacher, or none of the above, a male or a female, you are a priest. You’ve been set apart by God for service in His house, the church.