Christian Zionists Returning Bethlehem To The Days Of Herod 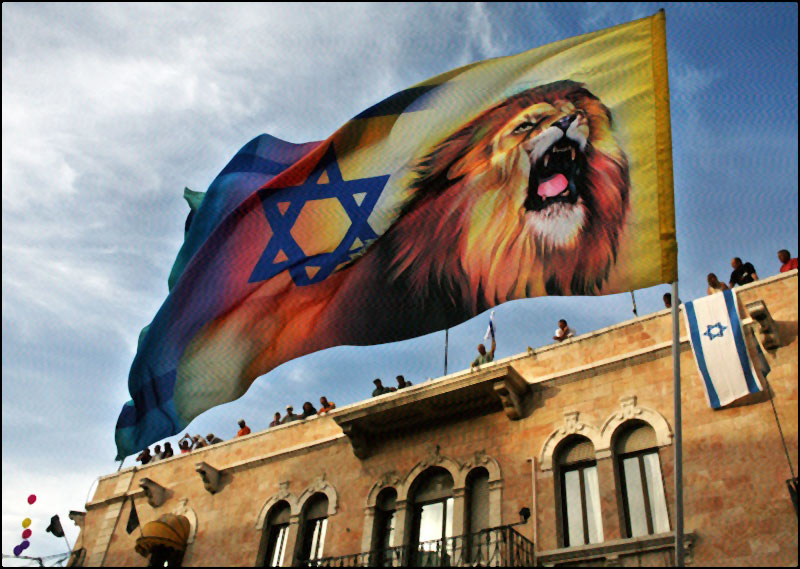 From a rooftop, Jerusalemites watch an evangelical Christian parade in support of Israel; a marcher carries a flag with a Star of David and a lion. © AP/Kevin Frayer, 2006.

As we enter the Christmas season, we love listening to traditional Christmas hymns, such as O Little Town Of Bethlehem. The place of Christ’s birth holds a special place in the hearts of all Christians. The references to Bethlehem in both the lyrics of Christian hymns and sermons of Christian ministers are almost ubiquitous at this time of the year.

When Christ was born in Bethlehem, the little city (and all of Palestine) was under the brutal control of King Herod, who was a proxy potentate of Pontius Pilate and the Roman government. The Herod dynasty became one of the most brutal, bloodthirsty dynasties in world history. The Herods were arguably even more evil than the Caesars—if that’s possible. Jesus, the light of the world, was born in the darkest of places and during the darkest of times.

Under the grotesque, genocidal leadership of the Caesars, Herods, Jewish Pharisees, Scribes, rabbis, etc., the followers of Jesus Christ experienced some of the most horrendous harassment in human history. They were starved, beaten, stoned, clubbed, imprisoned and killed—until the destruction of Jerusalem in 70 AD.

After the destruction of Talmudic—and later Roman—domination, Christians thrived in Bethlehem and the rest of Palestine. Contrary to modern anti-Muslim propaganda, Christians and Muslims mostly lived peacefully side by side throughout greater Palestinia in the centuries following the demise of the devilish dynasties of the Herods and the Caesars (including the Byzantine emperors). Without a doubt, the Talmudists and Romanists inflicted the greatest amount of death and destruction upon the followers of Christ than all other entities combined. 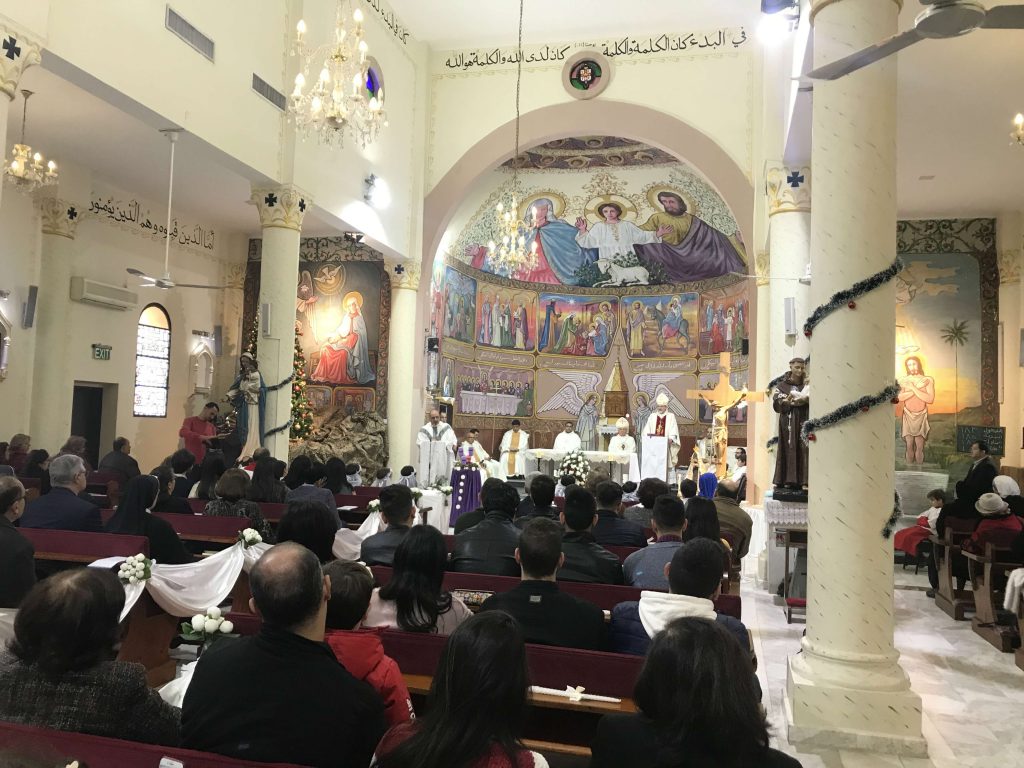 A church service in Gaza. The Christian population of Gaza has dwindled to a few hundred people in recent years (MEE/Adam Khalil)

Along with other Palestinians in the West Bank, Christians face land seizures, arbitrary detentions and collective punishment that are part and parcel of the Israeli occupation.

[A Bethlehem pastor’s wife] Rudaina [Isaac] believes that American evangelicals who form a vital base of support for hard-line Israeli policies — and helped propel President Donald Trump to power — have made the local Palestinian Christian community’s suffering more acute.

“If we are sisters and brothers in Christ — they [America’s Christians] should understand,” she says. “They want Jews to control this land, but Christ came for all the nations.”

Her pastor-husband said pointedly: “We are secondary to Christians in America. These Christians [in America] do not think about or care about us.” The pastor and his wife are absolutely right.

Christians in the Palestinian West Bank cite, “The pressure of Israeli occupation, ongoing constraints, discriminatory policies, arbitrary arrests, confiscation of lands [and a] general sense of hopelessness among Palestinian Christians.” Furthermore, Palestinian Christians see only “a despairing situation where they can no longer perceive a future for their offspring or themselves.”

The pastor and his wife—along with all of the other Christians in Palestine—are living with the calamitous consequences of the destructive doctrines of Christian Zionism in the United States.

The false teachings of John Darby and C. I. Scofield spawned scores of Zionist-indoctrinated Christian colleges and seminaries such as Dallas Theological Seminary and Liberty University—and most Baptist, Pentecostal and Charismatic colleges in America. These colleges and seminaries have produced tens of thousands of pastors, radio preachers, televangelists, Bible teachers, etc., who have immersed America’s churches in the false doctrines of Christian Zionism.

The election of Donald Trump has only intensified and multiplied the enslaving power and influence of Christian Zionism. The biggest reason evangelical Christians support Trump is due to his rabid endorsement of Zionist Israel. But for the Christians who live in Palestine, Trump and the evangelicals who support him are only making life harder.

A Christian from Haifi said, “These so-called Christians are causing us more damage than help — they understand the Middle East as much as I understand Micronesia.”

Popular Christian Zionists such as Pat Robertson, Robert Jeffress, Jerry Falwell Jr., Kenneth Copeland, Paula White, Franklin Graham, et al. are making it easier for Islamic radicals to recruit anti-Christian extremists. Every American bomb dropped on innocent Muslim people, every drone attack, every missile attack, every joint CIA and Mossad assassination and act of military aggression increasingly puts the lives of Arab Christians in mortal danger. And all of this is due entirely to the flagrantly false teachings of Christian Zionism. I’ll say it straight out: These Christian Zionist warmongering preachers in the United States have the blood of untold thousands of Arab Christians dripping from their pulpits.

Robert Jeffress, the influential pastor of the 13,000-member First Baptist church in Dallas and a spiritual adviser to Trump, explains evangelicals’ stalwart support of Israel this way: “The Bible says this land belongs to the Jewish people — period.”

Jeffress’ statement is quintessential Christian Zionist propaganda and is a gross misinterpretation of Scripture. To further illustrate the extreme insensitivity that resides in the hearts of Christian Zionists toward Palestinian Christians, Jeffress said, “If they [Palestinian Christians] do not want to continue to live under that arrangement [Israeli occupation and persecution], perhaps some need to go someplace else.” 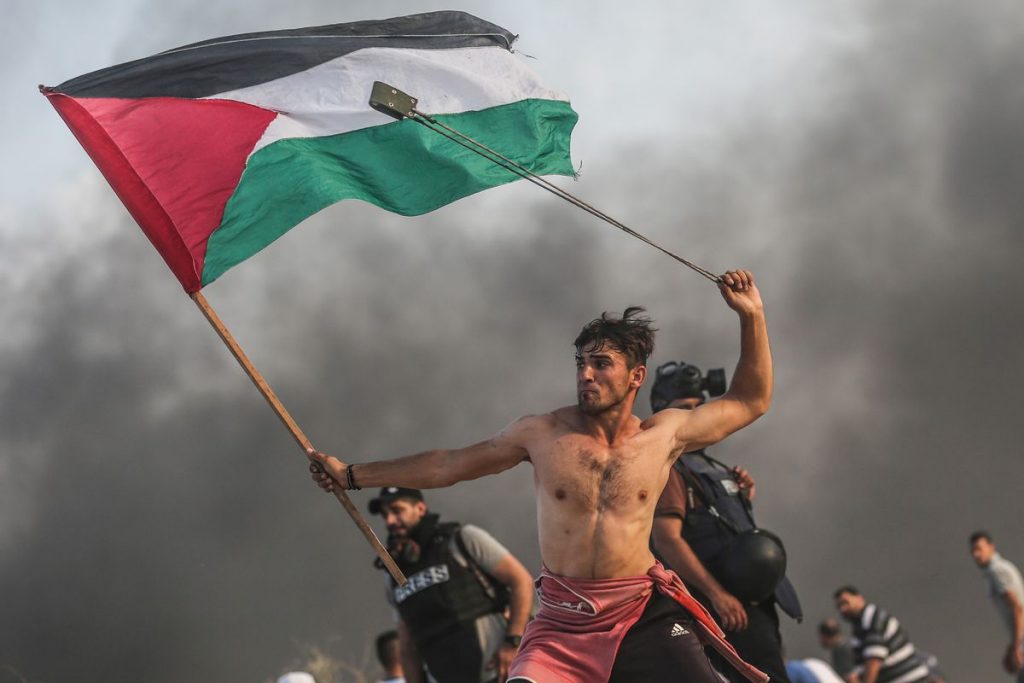 Can you imagine any pastor saying anything of this nature about persecuted Jews living in Nazi Germany? Yet, this celebrated Christian pastor says this about his fellow Christians living under Nazi-like persecution in the Zionist State of Israel? Such hardness of heart staggers the imagination. I tell you, Christian Zionism is a vile, wicked distortion of Holy Scripture.

Vice President Mike Pence, who claims to be an evangelical Catholic Christian, was warmly greeted by the Israeli government not long ago and invited to speak before Israel’s Parliament, the Knesset. However, the heads of the established Christian churches refused to meet with him during his trip. They know that he, Donald Trump and Secretary of State Mike Pompeo are no friends of the Palestinian Christians.

This report from Christians in Palestine notes: Included in the array of Palestinian Christian complaints is that Israeli walls and checkpoints have cut them off from their own kinsmen and business opportunities in communities and cities on the West Bank, but more especially from their holy sites, even including Easter services in Jerusalem and Bethlehem. On one recent Easter, the Israelis granted only 200 permits to Christians to visit Bethlehem, and only to those who were 55 years or older. No visits, per the Chronicle report, were permitted to Jerusalem. In effect, many Palestinian Christians believe it is Israel’s intention to drive them out so that Israel can define itself, according to the Palestine Chronicle, “as a beleaguered Jewish state amid a massive Muslim population in the Middle East. The continued existence of Palestinian Christians does not factor nicely into this Israeli agenda.”

A poignant statement from the Christian Post perfectly captures for American evangelicals the dilemma of Palestinian Christians: “When Americans sing carols about the ‘Little Town of Bethlehem’ this Christmas, they should keep in mind who lives there.” Reinforcing this point is found in another quote from Bethlehem’s mayor, Vera Baboun: “Bethlehem is the city that gave the message of peace to the whole world…But today, Bethlehem does not live the peace that it gave to the whole world.” 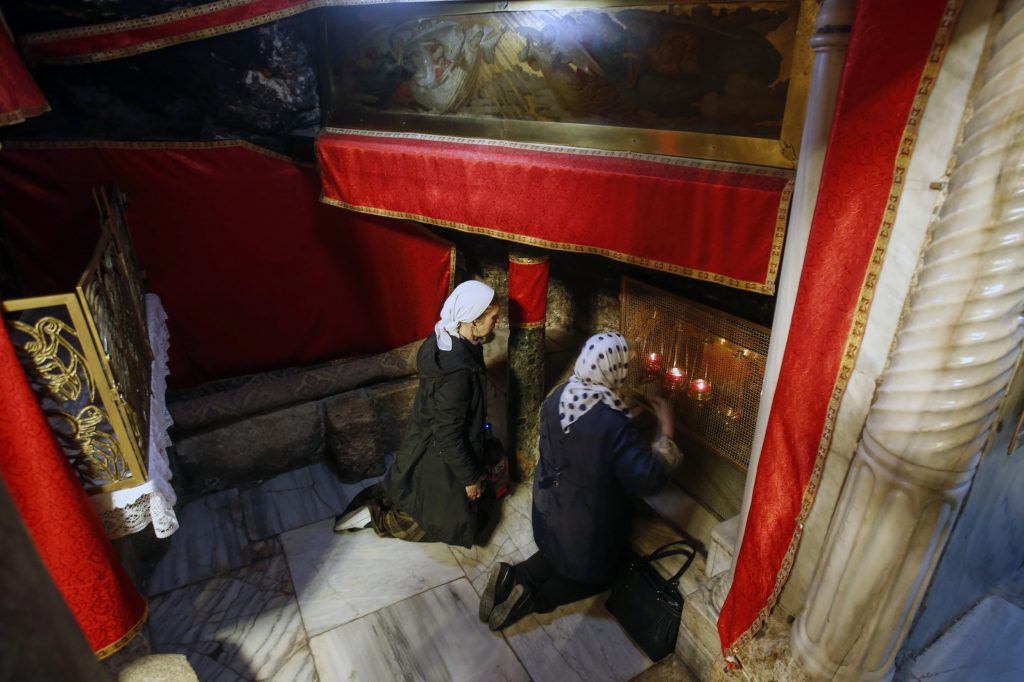 Christian pilgrims pray in the Church of the Nativity, the site where Christians believe Jesus was born, in the West Bank holy city of Bethlehem. (AFP)

At issue in this story is the fact that many evangelical Christians are conservative, aligning with a view that puts Israel’s security above all other priorities. This support blinds them to the issues confronting Palestinian Christians. The Christian Post writes about American evangelicals, suggesting that in “missing the complexity of the Israeli-Palestinian conflict, they are missing an opportunity to live out the message of peace that Jesus, born in Bethlehem, gave to the world.” Amen and Amen!

When the Lord Jesus Christ was born in Bethlehem—and lived as an adult in nearby Galilee—the governmental powers persecuted anyone who claimed the name of Christian. They were “the days of Herod.”

After the destruction of Herod’s Temple, however, the power of the Gospel of Jesus Christ saturated the land of Palestine, and for hundreds of years in many parts of Palestine—such as in Bethlehem—Christians lived peacefully in the light of Christ. But today, the blind, unbiblical obsession with the Aparteid State of Israel by America’s Christian Zionists is returning Bethlehem to the dark, dangerous days of Herod.