(WNS)–Although Iran is one of the most difficult places in the world to be a Christian, the underground house church movement there is exploding.

“Thousands upon thousands” of people in Iran are becoming Christians annually, according to Open Doors USA spokeswoman Emily Fuentes.

“The house churches are causing such rapid growth in conversions it is unmatched by any other country in the Middle East,” she said.

According to Mohabat News, estimates suggest the underground church network could include as many as 1 million people, but Fuentes said it is difficult to accurately quantify its size. Operation World recently ranked Iran as the country with the fastest growing evangelical population in the world. 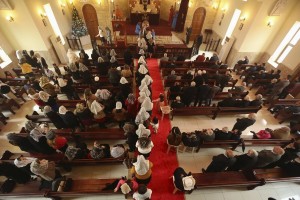 The Islamic Republic of Iran, a Shi’a Muslim theocracy, is ranked ninth on the 2016 World Watch List of most severe persecutors of Christians. The U.S. Commission on International Religious Freedom (USCIRF) has urged the designation “country of particular concern” for Iran since 1999 because of the regime’s persecution and discrimination against its citizens on the basis of belief.

“The government continues to use its religious laws to silence reformers, including human rights defenders and journalists, for exercising their internationally protected rights to freedom of expression and religion or belief,” USCIRF reported.

Iran’s Christian house churches are illegal and participants can face jail time, especially if they are not an ethnic minority, Fuentes said. Because they are considered Muslim, Farsi-speaking Persians are not allowed to go to Christian churches at all. They face reprisals, including violence, from authorities, the community, and even family members if they convert to Christianity.

“One of my biggest fears is that the secret police would come one day and they would rape me,” a female house church planter in Iran told The Voice of the Martyrs Radio. A former Muslim, she said she is high on the secret police’s wanted list. But after years of being a Christian, God gave her peace and took her fear away, she said.

Fuentes and Todd Nettleton of Voice of the Martyrs both said the severity of persecution in Iran is part of the reason for the church’s dramatic growth.

Dissatisfaction with the Islamic regime also is bringing people to Christianity.

Iran Alive Ministries broadcasts into Iran and ministers to unbelievers and the underground church. According to Iran Alive’s founder, more than 32,000 people have prayed with them to become Christians since 2001.

“[I]nto that void in the hearts of Iranians, the gospel message of a Savior who loves them enough to die for them is like sweet music,” Nettleton said. “And it is coming on radio waves, over satellite television, online, and even in supernatural means like dreams and visions.”