(WNS)–The debate about transgender restroom access has forged unlikely allies. In January, the conservative Family Policy Alliance (FPA) and the self-described “radical feminist” Women’s Liberation Front (WoLF), co-filed a brief with the Supreme Court opposing efforts to allow transgender students to use the restroom of their perceived gender identity.

The case, Gloucester County School Board v. G.G., is scheduled for oral arguments March 28. It will be the first time the Supreme Court hears a case involving gender and restrooms.

The joint FPA and WoLF amicus brief argues in support of the Virginia school board policy requiring students to use restrooms corresponding to their biological sex. Last year, a federal District Court and the 4th U.S. Circuit Court of Appeals ruled against the school district in favor of high school student Gavin Grimm, a biological female who identifies as male and asked for access to the boy’s restroom.

The lower courts based their decisions on a 2015 Obama administration directive threatening to withhold federal funds from school districts that do not allow transgender students to use the restroom of their choice. The order equates denying transgender students bathroom use to a violation of Title IX, a federal law banning sex discrimination in education. 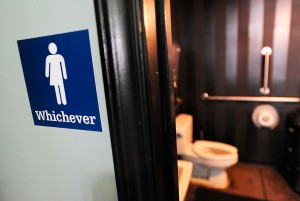 DURHAM, NC – MAY 11: A gender neutral sign is posted outside a bathrooms at Oval Park Grill on May 11, 2016 in Durham, North Carolina. Debate over transgender bathroom access spreads nationwide as the U.S. Department of Justice countersues North Carolina Governor Pat McCrory from enforcing the provisions of House Bill 2 (HB2) that dictate what bathrooms transgender individuals can use. (Photo by Sara D. Davis/Getty Images)

Kara Dansky, WoLF’s board chair, acknowledges the two organizations differ on abortion, gay rights, and homosexual marriage, but says her organization decided to align with FPA because the left has “sold out” women when it comes to gender identity.

“The notion that humans are sexually dimorphic mammals is not a conservative argument, it’s not a liberal argument, it’s not even a political argument at all, it’s basic biology,” Dansky said in an FPA video. “And it matters in terms of defining women and girls as a legal category worthy of civil rights protections.”

Autumn Leva, FPA’s policy director, agrees: “From our point of view, God made male and female, both in his image, and that’s why … we will always oppose any efforts to erase either sex from the law.”

The Supreme Court issued a stay on the appeals court ruling in Gloucester until it hears and decides the case.

Enforcement of the Obama administration’s mandate also remains on hold while suits filed by 23 states against it make their way through the court system.

Some states are pushing ahead with state-level protections, following in the steps of North Carolina’s controversial House Bill 2. So far in the 2017 session, lawmakers in 14 states have proposed legislation requiring residents use the sex-segregated facility that matches their biological sex. Bills failed to pass in South Dakota and Virginia but are pending in the other 12 states.

It’s  not clear how President Donald Trump’s administration will come down on this issue. The Justice Department on Friday said it would no longer challenge the temporary injunction blocking enforcement of the Obama-era policy. The move does not practically change the current situation—the injunction remains in place regardless—but could signal a shift in approach on transgender students and bathrooms.

Groups like FPA and WoLF are pushing the administration to go one step further and withdraw the entire mandate.

“How wrong does something need to be for a Christian family group and a radical feminist group to take their argument together to the Supreme Court?” Leva asked.