Christians in Washington Respond to South Carolina Tragedy with Prayer

(WNS)–Pastor Otis Gordon of Charleston, S.C., stood on the grass near the U.S. Capitol on Thursday afternoon, his eyes brimming with tears. Around him more than one hundred lawmakers and congressional staffers, dressed for the business day, bowed their heads. And Gordon prayed for his city.

In response to the slaughter of nine African-Americans on Wednesday evening at a church in Charleston, S.C., Sen. Tim Scott, R-S.C., organized Thursday’s prayer vigil in Washington. The group met at noon to join Gordon and Sen. James Lankford, R-Okla., in prayer for the victims.  “God is near to the broken-hearted, and that would match South Carolina and all of us today,” Lankford said.

The victims of the shooting met Wednesday for a prayer meeting inside the historic Emanuel African Methodist Episcopal Church. Police suspect 21-year-old Dylann Storm Roof walked into the service and sat for an hour before opening fire. FBI and local police apprehended him Thursday.

“A church should be one of the safest places on the planet,” Senate Chaplain Barry Black told the group at Thursday’s vigil. “And people assembled to lift their head in prayer to hear the word of God. And they were brutally murdered in the house of God.”

Black opened the vigil by reciting an old hymn: “Come to the mercy seat. … Here bring your wounded hearts, here tell your anguish; Earth has no sorrow that Heaven cannot heal.” 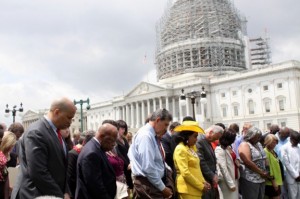 “Our heart aches for our nation,” Black said. “We pray that somehow God would use us to end the insanity of violence that we see.”

Gordon said he came up to Washington for Scott’s annual prayer breakfast Wednesday. He found out what happened in his city while he was gone when he turned on the television that night.

His first thought was the need for churches to pray. On Thursday, he prayed for peace for the victims’ families and for Charleston. He prayed God’s love “would usher in a flood of hope, of joy, and of restoration.”

“We seem to have forgotten that righteousness exalts a nation,” Black said. He told the group America needs to seek God: “We need healing in this great land.”

The U.S. Department of Justice is investigating the shooting as a hate-crime.

“Anyone who would do something like that is pure evil,” House Speaker John Boehner, R-Ohio, said Thursday. “On behalf of the whole House, let me say how shocked I am at the murder of church-goers.”

“God heal us as a nation,” Lankford prayed. “We need Your help.”