By David Parsons/JNS.org
For Jews and Christians, the Passover season is a special time for reflection on the rich spiritual truths contained within this remarkable holiday. Indeed, we can all observe the command to “remember” the incredible Israelite deliverance from bondage in Egypt.

For Christians, the events of a momentous Passover some 15 centuries later have given added meaning to this holiday, so that the truths of the first are reinforced in the latter. Deliverance from Pharaoh’s taskmasters became freedom from slavery to sin. The blood of a lamb on the doorposts became a typology of Christ’s sacrifice on the cross.

Yet the parallels between Pesach and Easter were lost for centuries to most Christians when the early Church fathers deliberately severed our faith from its Jewish roots. In time, this hostility to Judaism produced vicious blood libels against Jews at Passover.

Today, however, multitudes of Christians are rediscovering our Hebraic roots. Indeed, TIME magazine recently identified growing Christian interest in our faith’s Jewish heritage as one of the ten top trends of our day.

Even respected Jewish scholars have started joining Christian theologians in rediscovering the “Jewishness” of Jesus and the Hebraic origins of Christianity. One notable in this regard is the late Prof. David Flusser of the Hebrew University of Jerusalem, considered the leading Orthodox Jewish expert on the Second Temple era and Early Christianity.

Flusser placed Jesus within the Pharasic tradition and viewed him as among the great sages of his time, such as Hillel and Ben-Shammai. But Flusser concluded that the Galilean preacher went boldly beyond the classic Judaism of that day, for instance by proclaiming the advent of the Kingdom of God and espousing a radical ethic of loving one’s enemy. 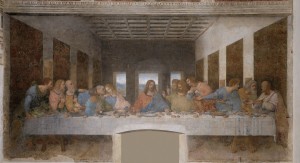 As a result of such groundbreaking scholarship, the Feast of Passover is one occasion when the lineage and cultural identity of Jesus as a “son of the covenant” now holds so much more meaning for Christians. In fact, nothing reattaches Christians to their Jewish roots faster than realizing the Last Supper was actually a Passover seder meal being led by a Jewish rabbi.

Thus, we can now see in the Gospel narratives just how closely Jesus held to Jewish traditions in presiding over the Passover meal with his disciples—or rather, his talmidim.

For instance, he followed the custom then developing in First Century Judaism of serving four cups of wine at the Passover meal to mirror the four great “I wills” of Exodus 6:6-7. When Jesus took the third cup—considered the “cup of redemption”—he used it to seal a new covenant with his followers.
Interestingly, he also used customary Jewish words of betrothal at that same moment, promising to go build them all mansions in his Father’s house and to come back for them one day as a bridegroom for his bride (John 14:2-3).

In serving them wine and unleavened bread, Jesus further played off the command to “remember” the Passover by instructing his disciples to always partake of it “in remembrance of me!”

Then, one of the most extraordinary moments of the Last Supper came when he washed the feet of his disciples.

Like other great rabbis of his day, Jesus had developed a unique preaching style by telling parables, many of which are universally known to this day, such as the Good Samaritan and the Prodigal Son. But he was different in the way he also practiced what he preached. In washing the feet of his disciples, the rabbi Jesus taught by deed and not just words what it means to be a servant in His kingdom (John 13:14-15).

And finally, Jesus demonstrated tremendous grace that evening when he gave the place of the guest of honor to his immediate left to Judas, even though he knew this was the one about to betray him. What a difference it would have made down through history if Christians had understood that Jesus was never bitter towards Judas.

Sadly, it is too late to change that history. But we are witnessing a sea change in Christian attitudes towards the Jewish people today, as we understand better the Jewish matrix of our faith. This historic shift is helping to build Christian support for an embattled Israel at a critical hour. And just as importantly, it is shielding multitudes of Christians against modern-day blood libels and other anti-Semitic lies now being hurled at the Jewish state.
David Parsons is an ordained minister who serves as media director for the International Christian Embassy Jerusalem (www.icej.org).

Caption: Leonardo da Vinci’s mural painting of the Last Supper, located at the Convent of Santa Maria delle Grazie in Milan, Italy. Nothing reattaches Christians to their Jewish roots faster than realizing the Last Supper was actually a Passover seder meal being led by a Jewish rabbi, writes David Parsons. Credit: PD-Art.