(WNS)–After initially threatening an African-American church with large fines because its choir rehearsals allegedly violated a city noise ordinance, the city of Oakland, Calif., backed off due to public support of the small congregation.

“This is strange,” Thomas Harris, pastor of Pleasant Grove Baptist Church, told the San Francisco Chronicle. “[It’s] quite unheard of for a church to be fined because of joyful noise.” Established in 1951, the small church has served the community for over six decades.

Harris recently received a letter from the City of Oakland stating someone had filed a noise ordinance violation against the church due to a “nuisance activity, namely excessive noise in the form of choir practice with live musical instruments … and amplified voices.” The letter accused the choir of spoiling “the use and quiet enjoyment of the surrounding community’s property.” If they refused to stop the offending noise, the city threatened to levy a $3,500 fee and charge $500 a day until they complied. 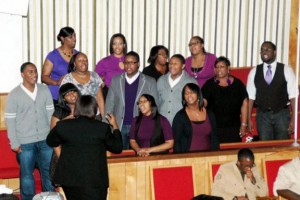 The church’s gospel choir practices weekly on Wednesdays from 7 to 9 p.m. But a copy of the complaint received by the Chronicle asserted the music sometimes goes on until 2 a.m. The complaint also stated the person who filed the grievance claimed to be an 11-year resident of West Oakland, but it did not name him or her, the Chronicle reported.

As the news of the city’s threat against the church spread, the community became riled up. George Holland, chapter head of NAACP Oakland, told the Chronicle he was “deeply troubled” by the complaint and that it was a sign of cultural divisions in Oakland. Local news stations covered the story with anchors using sarcastic tones, such as a KPIX-TV report that opened with, “Alright. Since when is singing at church a public nuisance?”

Several area pastors met in mid-October to discuss the issue. KPIX reported the pastors agreed all churches are threatened by the city’s action against Pleasant Grove. They also believe the complaints are coming from new folks in the neighborhood due to gentrification.

“We’re being bought out. We’re being moved out. We are being priced out of our own neighborhood,” Lawrence Van Hook, the senior pastor at Community Church, told KPIX.

“I’m an atheist who completely supports the rights of this church to sing and make as much ‘joyful noise’ as they wish,” Kathryn Benson wrote. “How dare anyone come into a neighborhood and try to tell the residents what they can do. I’d sit outside and be happy to listen to the music.”

On Oct. 19, city spokeswoman Karen Boyd told The Grio, an MSNBC website geared toward African-Americans, that the letter sent to the church was a courtesy notice. Boyd said she hasn’t received any more complaints and doesn’t intend to fine the church.

In the meantime, Harris told multiple news sources the church plans to carry on choir practices as usual.