(WNS)–The Church of England General Synod on Feb. 15 rejected a report issued in January that reaffirms church canon on marriage. By a slim margin the body voted not to “take note” of the House of Bishops’ report, which provided a framework for addressing issues related to human sexuality, marriage, and the church.

Impassioned speeches during the debate included calls for full LGBT inclusion into church life and pleas for fidelity to Scripture. Although a majority of delegates representing the House of Bishops, House of Clergy, and House of Laity voted to approve the motion 242-184, passage required majority support from each of the three houses. The House of Clergy dissented, ending debate and shelving the report indefinitely. 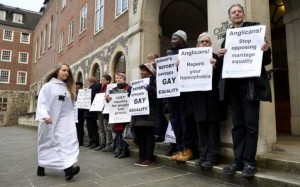 Seen as a victory for LGBT advocates, the vote leaves in place decades old guidance documents that affirm Biblical marriage but raises questions about how the House of Bishops will reevaluate the issue.

The two-hour debate highlighted the divide over same-sex relationships that continues to roil the Church of England. The House of Bishops’ report reaffirmed Biblical marriage but also called for “maximum freedom” within the Church for LGBT inclusion.

“To deal with that disagreement, to find ways forward, we need a radical new Christian inclusion in the Church,” Archbishop Justin Welby said. “This must be founded in Scripture, in reason, in tradition, in theology; it must be based on good, healthy, flourishing relationships, and in a proper 21st century understanding of being human and of being sexual.”

Public condemnation of the report prior to the Synod set the tone for the debate.

Jay Greene, a “lesbian Christian” in a civil partnership with a member of the clergy, said the people in her rural church community “were horrified to be reminded that you expect us to be celibate” outside of man-woman marriage.

“And their question to you, ‘Is this an instance of institutionalized homophobia?’” Greene said. “The congregation, the people in the shires, want this church to go further, faster, forward.”

But Kate Wharton, vicar of St. George in Liverpool, along with other single and celibate clergy and laity, challenged the idea that human fulfillment is contingent on romantic and sexual fulfillment.

“My understanding of what the Bible teaches about sex and marriage and the fact that I do not have a husband leads me to believe I must live a celibate life with all of its struggles and joys,” Wharton said. “It has come to be a great blessing and freedom for me.”

Ed Shaw and Sam Allberry admonished the Synod to take note of the testimonies of people like them who are same-sex attracted and yet whose identity is not bound by their sexual orientation but by their love of Christ and fidelity to Scripture.

Opponents of the report said “the world is watching” and the church will lose opportunities to share the gospel because its refusal to alter the doctrine on marriage is perceived as unloving toward gays and lesbians.

Only one of the delegates bluntly referred to the debate’s unspoken issue—sin.

“It would seem from what we’ve heard here today the two positions are irreconcilable,” said Andrea Minichiello-Williams of Christian Concern and Christian Legal Centre. “And that is why it is so important to speak so clearly with regard to sexual sin because, actually, heaven and hell depends upon it. … As we discuss these issues the world watches. And more than anything else the world needs to know Jesus.”