(WNS)–Despite claims this week’s Church of England General Synod resulted in no doctrinal changes on the issue of sexuality, conservative Anglicans are lamenting the three-day meeting, saying the Church stepped away from Biblical Christianity and mocked God’s Word.

In February, the General Synod rejected a report reaffirming traditional church cannon on marriage, a decision seen as a victory for LGBT advocates within the Church. Archbishop of Canterbury Justin Welby said afterwards “a radical new Christian inclusion in the Church” was needed to deal with disagreements and find ways forward.

His timeline for the working groups—a report by 2020—had some pro-gay-marriage synod attendees claiming the Church had pushed the issue into the “long grass.”

But the synod did take up two other issues this week: conversion therapy and transgenderism.

Gavin Ashenden, a former Anglican priest, chaplain to the Queen, and member of the General Synod, described the two issues as “the thin end of the wedge” slowly being pushed into the door. In an interview for AnglicanTV, Ashenden said despite no official doctrinal changes, “the General Synod managed to deal with issues of sexuality in a way that made it very clear that there was a change of theological climate within the church.” 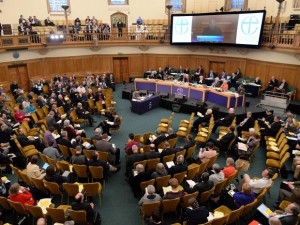 The synod also voted to pass a motion recognizing “the need for transgender individuals to be welcomed and affirmed in their parish church.” The motion called on the House of Bishops to consider preparing liturgical materials to mark a person’s gender transition.

These issues led the leader of the Anglican church in Nigeria, Nicholas Okoh, to conclude on Tuesday the Church of England is in “grave spiritual danger.”

“Although the Church of England’s legal position on marriage has not changed, its understanding of sexual morality has,” Okoh wrote.

The synod confirmed the majority of synod members have more confidence in “political influence than spiritual witness,” according to Susie Leafe, director of Reform, a network of conservative evangelical Anglicans. Leafe said the proceedings favored a “bland secularized view of ‘welcome’ and ‘affirmation’” over the great news that Jesus Christ offers radical inclusion and radical transformation.

“Rather than look to God’s revealed word and the historic doctrines of the Church to guide our decision-making, the majority were influenced solely by tragic stories of individuals struggling to work out their identity,” Leafe said. “It was a sad day for faithful Anglicans throughout the world.”