(WNS)–Record-breaking floodwaters are beginning to recede in southeast Louisiana, revealing thousands of devastated homes and businesses.

The slow-moving, low-pressure system that started off the Gulf Coast of Florida lingered for days and dumped more than 2 feet of rain on several parishes. Gov. John Bel Edwards declared a state of emergency on Aug. 12 as rivers quickly rose well above record levels. More than 20,000 people had to be rescued, and the death toll now stands at 11.

Churches not swallowed by water opened their doors as Red Cross shelters, while national relief organizations rolled up their sleeves to help with cleanup. First Baptist Church in Zachary, La., – an area slammed by 2 feet of rain in two days – started welcoming flood victims to its dry family life center on Saturday morning. 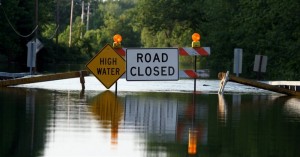 Sara Horn, a volunteer with the church, was getting ready for a normal day when the rains cancelled school for her 15-year-old son. She and her husband spent Friday at home, thinking they had seen the worst of the storm. Despite official warnings, no one expected a flood.

“This is not New Orleans. This is Baton Rouge,” Horn told me. But her early Aug. 13 perusal of Facebook showed the damage was real: “We saw post after post of people in our church and people in our community whose houses were under water.”

All morning, First Baptist leaders scrambled to take donations, organize rooms of clothing and bedding, set up a game room for kids and a medical station for the volunteer doctors and nurses who offered to help.

“By the time those first people came in with blankets wrapped around them, because they were completely wet, we were ready to welcome them and just start helping them get dry,” Horn said. 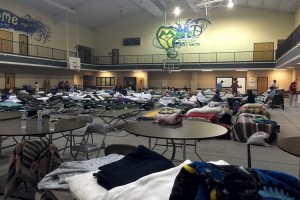 More came through the church to eat and shower, get fresh clothes, medical help, or baby items.

One couple, rescued Sunday morning, “came in wet and shaking,” Horn recalled. They told church workers they had called the police for help, but no one came for two days. A 94-year-old man had to be carried in by a volunteer who helped rescue a whole neighborhood with his boat.

“At one point we didn’t even know who this 94-year-old man was, because he didn’t have ID on him,” Horn said. “We had volunteers hunt down his address and drive to his area and ask questions and get information. People just went above and beyond.”

By Tuesday, the water had receded enough for some people to go home. Now, First Baptist, along with many other churches in the area, has turned its manpower to surveying and fixing damaged homes. For days, church repair teams have been ripping out soaked drywall. As rivers retreat to their banks, crews have been able to access more heavily damaged homes, where “water went all the way to the ceiling,” volunteer Anna Johnson told me Tuesday. 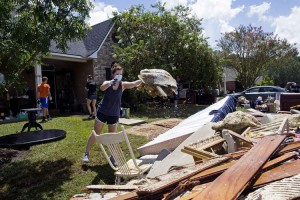 Hannah McLain, 22, a volunteer organized by a local Baton Rouge church, helps throw out waterlogged items from the home of Rhonda Brewer in Baton Rouge, La., Tuesday, Aug. 16, 2016. Around 100 students from LSU and local high schools also helped residents clean up in the area. At least 40,000 homes were damaged and eight people killed in the historic Louisiana floods, the governor said Tuesday, giving a stark assessment of the widespread disaster. (AP Photo/Max Becherer)

“We had been kinda cutting about 4 feet out of the drywall in certain areas, and we’re kinda to a different level today,” she said.

Down the street from First Baptist, Zachary United Methodist pastor Ricky Willis had flood waters rise “carpet level” in the parsonage, he told me. But the church remained dry and began offering childcare for flood victims while teams from the church went out to repair homes.

But not every church was able to help. Many found themselves among the flood victims. First United Methodist Church in Denham Springs had to close the Red Cross shelter it initially set up, turning away flood victims and canceling services.

Some churches that remained open quickly ran out of room and had to turn people away.

Armed with duffel bags full of just “a change of clothes,” Family Research Council President Tony Perkins couldn’t get his family of seven into a local church shelter. Perkins recounted the family’s drama Tuesday, appearing as a guest on his own radio show, Washington Watch.

The rain flooded the family home and left 10 feet of standing water in the driveway. “We threw everything in an oversized canoe, in a pea-row, and we’re paddling out, and finally we got a tow by another little boat coming by with a motor,” Perkins said. At the first patch of dry ground, they got out and rescuers took them to a church already filled to capacity.

“But in God’s provision, a former church member who had just moved and happened to live just across the street from there and happened to be there,” took in the family for the night, Perkins said. They have since returned home and are living in an RV. “So we’re going to be on a six-month camping spree,” he quipped.

Perkins and others at his church, Greenwell Springs Baptist Church, are working with Samaritan’s Purse to set up one of two planned work sites. Perkins estimates Samaritan’s Purse and Southern Baptist Disaster Relief will have boots on the ground by Thursday afternoon.

“We can’t help everyone in Louisiana,” Haas said. “But for the ones we can gain the opportunity to go and serve, our desire is to go love on them; our desire is to go assure them that God was not caught by surprise by this event, this did not happen without His knowledge, and that He still loves them, and that we love them.”