Even with religious exemptions, uncertainty remains about Scouting’s future

(WNS)–When the Boy Scouts of America (BSA) announced in January a policy to allow transgender children into its programs, it said church affiliated troops could claim a religious exemption from the change. But it might not be that simple in practice.

For more than 100 years, BSA enrolled boys into its programs based on the gender listed on their birth certificates. But now the Scouts will allow any child to become a member as long as he or she identifies as male, regardless of biology.

In a video message, BSA’s chief executive Michael Surbaugh said birth certificates are no longer “a sufficient reference point” as more and more states interpret gender identity differently. BSA officials told me they were no longer accepting interviews at this time, but in an emailed statement, communications director Effie Delimarkos said there are still religious exemptions for the new policy.

“With regard to religious partners, they will continue to have the right to make decisions based on religious beliefs,” Delimarkos said. “The BSA will work with families to find local Scouting units that are the best fit for their children. If a religious organization declines to accept a youth or adult application based on their religious beliefs, we ask that they please notify their local council so that a unit open to accepting the individual can be offered as an option.” 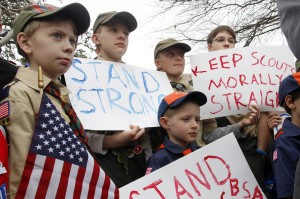 A 9-year-old from New Jersey became the BSA’s first openly transgender member this week. Joe Maldonado, who identifies as male, had to leave a troop in December after leaders discovered Joe was not a boy.

Justin Wilson, executive director of Scouts for Equality, told me BSA’s prior policy was not an issue, but Joe’s story began the conversation to advocate for new transgender rules. It only took about a month for Surbaugh to announce the change.

Florida attorney John Stemberger watched BSA succumb to the LGBT agenda after the organization announced in 2013 it would allow homosexual Scouts. He helped organize Trail Life USA, which launched at the beginning of 2014 as a Christ-centered scouting alternative.

Stemberger told me BSA was making itself a target for future legal battles. With the announcement, there are now two opposing policies in place: one that accepts transgender Scouts and one that allows church chartered troops to deny them entry. This framework creates poor optics and could cause a public relations mess at the very least, Stemberger said.

BSA has about 2.3 million members across the country. More than 100,000 of its Scouting units operate under chartered organizations. Of those, churches and other religious organizations charter approximately 70 percent.

Some chartered organizations have welcomed the change. Bruce Chudacoff, chairman of the National Jewish Committee on Scouting, told me he oversees around 200 Scouting units and has already had calls from progressive temples that want to start a troop because of the rule change.

Other religious Scouting groups had mixed responses to the new policy. In a statement this week, the National Catholic Committee on Scouting, which runs more than 7,000 Scouting units, said the change would have no impact on how it runs its troops. Mormon congregations had a similar reaction and expected to use the religious accommodation.

Fred Carter with the National Association of United Methodist Scouters said he was not sure how his affiliates would change in response to the new policy, but their goal of ministering to youth would remain the focus.

Ted Spangenberg, president of the Association of Baptists for Scouting, told me he does not expect any of the Baptist units to accept a transgender child, but that decision will be made on a case-by-case basis. Next week, Spangenberg will meet with the BSA’s National Religious Relationships Committee to glean more clarity on the issue.

“We have to play by the rules forced upon us,” Spangenberg said. “We’re all extremely disappointed. But we still believe through Scouting we can minister to families that otherwise would never be reached.”

“The next thing they will have is transgender leaders, and then they will give up local control,” he said.

Stemberger explained further policy changes could prompt more families to look for alternatives. He said on the day BSA announced it would allow girls into its programs, Trail Life USA’s website crashed from the influx of new traffic.