Complaint Against Teacher for ‘Undermining Theory of Evolution’ 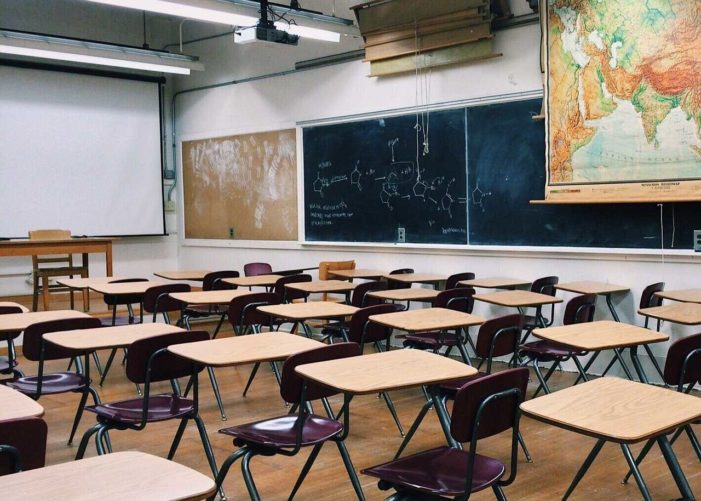 HOLLAND PATENT, N.Y. — A school district in New York says that it has addressed a public high school biology teacher — who has agreed to comply — after it received a complaint from the Wisconsin-based Freedom From Religion Foundation (FFRF) that the teacher recently “undermin[ed] the theory of evolution” to students.

FFRF sent a letter to Holland Patent Central School District Superintendent Jason Evangelist on Feb. 18, advising that a “concerned parent” had alerted them to the classroom talk at Holland Patent High School.

It said that biology teacher Phil Lucason told students that when they take the Regents Exam, they will have to “play the evolution game, where evolution is the answer to everything.” He explained that none have been “able to find when something becomes something else” and that evolution is contrary to genetics, such as if a dog “underwent several mutations and became a cat.”

Lucason also reportedly told his class that polar bears could mutate among themselves from brown fur to white fur, but that the eye, for example, could never have evolved because of its complexity and the necessity for a series of mutations.

“So, what that means is that you have to play the evolutionary game because the people writing this are married to that idea, despite the new proofs and the science coming out,” he is quoted as saying about the exam.

FFRF claims that it is illegal for Lucason to speak against evolution in the classroom and rather teach creationism.

“Mr. Lucason’s attempt to undermine what he was teaching is both unconstitutional and pedagogically deplorable,” it wrote. “Teaching creationism or any of its offshoots, such as intelligent design, in a public school is unlawful because creationism is not based on fact.”

The atheist and agnostic organization pointed to various court rulings that held that teaching creation science in the classroom would violate the Establishment Clause by promoting religion.

“Any attempt to teach that there is a controversy about evolution is fraught with legal peril,” it claimed. “Evolution, like gravity, is a scientific fact. … No controversy exists in the scientific community regarding the fact of evolution, and the teaching of alternative theories or a controversy is not only inappropriate and dishonest, it is unconstitutional.”

FFRF requested that the district conduct an investigation into the matter and take corresponding corrective and disciplinary action.

“Mr. Lucason must be directed to refrain from promoting religion or attacking evolution to his students,” it opined. “If he cannot do this, he cannot be a teacher in a public school.”

The parent who complained to FFRF — who has remained anonymous — similarly claimed to the Utica Observer-Dispatch,“A biology teacher telling students that evolution can cause only minor changes within a species and cannot cause one species to gradually become a different species over the course of thousands of years is the equivalent of a math teacher telling students that it’s possible to add two plus three, but it’s impossible to multiply 987 by 6,789.”

“If a math teacher taught his students that multiplication were an impossibility, there would be no question. People wouldn’t say that he was entitled to his opinion,” they said. “He would be told by administration that if he weren’t willing to teach what he is supposed to teach, he would not be allowed to continue as a teacher of the subject. And that’s exactly what should happen in this case.”

Superintendent Evangelist responded to FFRF’s letter on Feb. 26, advising that the district discussed the matter with its attorney and subsequently addressed the teacher, who agreed to comply.

“We have consulted with our legal counsel to confirm a clear understanding of the constitutional requirements referred to in your letter regarding instruction on evolution,” he wrote. “We have addressed these requirements with Mr. Lucason who has indicated his

understanding of the requirements and his commitment to them. We are confident that his presentation of the curriculum will comply with the New York State Education Law and the U.S. Constitution.”

Lucason likewise told the Observer-Dispatch, “Having taught about evolution for 20 years, I know that our students hear various theories on the origins of species. I enumerated some of them by way of example. My mention of those other theories led to the concerns that have been articulated. In the future, I will not refer to other, non-scientific explanations and will clearly teach the science and theory of evolution as the explanation for the development of life on earth as provided by the New York State standards.”

The Theory of the Evolution of Man

As previously reported, more than 1,000 scientists have signed the “Dissent From Darwinism” statement since it was first posted online by the Discovery Institute’s Center for Science & Culture. The site where others in the scientific community can sign the statement includes comments from prominent professors and researchers who explain why they have doubts about Darwinian theory.

“Darwinian evolutionary theory was my field of specialization in biology. Among other things, I wrote a textbook on the subject thirty years ago. Meanwhile, however I have become an apostate from Darwinian theory and have described it as part of modernism’s origination myth,” wrote Dr. Stanley Salthe, professor emeritus at the Brooklyn College of the City University of New York.

Dr. Marcos Eberlin, the founder of the Thomson Mass Spectrometry Laboratory, said that he became skeptical about evolutionary theory after realizing the wonders of the genetic code and “its many most intelligent strategies to code, decode and protect its information, such as the U x T and ribose x deoxyribose exchanges for the DNA/RNA pair and the translation of its 4-base language to the 20AA language of life.”

He remarked that genetics “absolutely relies on a diversity of exquisite molecular machines made by the products of such translation forming a chicken-and-egg dilemma that evolution has no chance at all to answer.”

As previously reported, not all of those who accompanied Darwin on his journeys supported his theories. During the 1860 Oxford evolution debate, Admiral Robert FitzRoy, who had once served as the captain for Darwin’s voyage to the Galapagos Islands and played a significant role in the development of the Origin of Species, repented of his participation.

Reports state that FitzRoy walked to the front of the room during the debate, “lifting an immense Bible, first with both and afterwards with one hand over his head, [and] solemnly implored the audience to believe God rather than man.”