The connection Picasso makes between the divine, beautiful, and poetic is quite appropriate; it is from the divine that all beauty and poetry geminates. 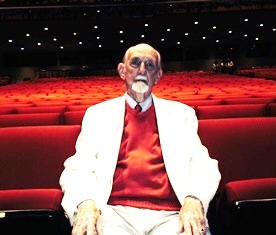 In a recent lecture given by composer, Warner Hutchison (b. 1930), he, too, recognizes the correlation between the three engaging words.

The symposium was the Southwest Regional Tuba Euphonium Conference. Hosted by Dr. Richard White and Ken Friedrich, the conference took place in April 2015 in the small community of Grants, New Mexico (one hour west of Albuquerque). With participants, ensembles, and performers descending upon the town from around the region, the conference was full of tuba and euphonium players wanting to hear from the brightest and best in their field.

Dr. Hutchison was invited to speak concerning two of his pieces, Sonatina and Deep Calls to Deep. Concerning Sonatina, Dr. Hutchison said, “Sonatina in Three Movements was composed in 1956 for my debut as a new faculty member on my first faculty recital at Houghton College, Houghton, New York.

“My decision to write a work of euphonium and piano was based on the paucity of published solo works for this glorious instrument. There was one catch: Houghton did not have a euphonium. So I found an old, dented baritone horn in a dusty cabinet somewhere. And despite my horn embouchure, I managed to premiere the work on the recital.”

Regarding its publication, Dr. Hutchison said, “I took my first trip to New York City with my bundle of compositions. Up to that time a number of my choral works had appeared with other publishers. In the offices of mighty Carl Fisher I met a very pleasant editor named Scott Wilkinson. Out of my entire binder Scott selected my Sonatina. What happened next, as they say, is history.”

The composition has been used throughout the United States in university, high school, and conservatory programs. It’s a standard composition for euphonium.

After Warner’s lecture on the piece, Dr. Jeffrey Cottrell with accompanist, Mary Ann Ybarra, performed the composition—to great effect. The recital hall was a fine space for the transmission of such beautiful music.

Next, Dr. Hutchison spoke about the second piece, Deep Calls to Deep at the Thunder of Your Waterspouts.

“Deep calls to Deep at the Thunder of Your Waterspouts was commissioned by Dr. Jim Shearer whom I had the distinct privilege of knowing as a colleague at New Mexico State University. Jim was and is an inspiring teacher.” 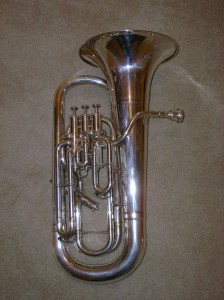 About the unusual name, Dr. Hutchison said, “The two movements are based on a passage from the Bible from the Book of Psalms, Psalm 42, a prayer of King David. In this Psalm David prays in the midst of personal trial and distress. David glorifies God for the wonder of His universe, including the “waterspouts” that appear
over ocean water.

“The tuba melody represents the voice of King David and the constant recurring patterns in the piano depict the undulating motion of ocean waves. The tuba melody is in the form of a palindrome—musical ideas that read the same backward and forward. The pianist depicts the roar from the upheaval of the water in the second movement.”

The work is published by Subito Music in New Jersey. Instead of a live performance, Dr. Jim Shearer, who was in attendance, gifted the audience with a recording of the composition.

To say the least, the music was well received. As an American composer of great reputation, many in attendance were pleased Dr. Hutchison carved out time to address the audience, touching hearts with beauty, musical poetry, and a sense of the divine call of God’s hand upon a life in music.