Officials said the suspects attacked 50-year-old Gamal Tawfiq as he walked to El-Samran School in the coastal city of el-Arish, where he taught. Two militants followed him on a motorbike and shot him in the head.

On Feb. 5, suspected militants murdered a Coptic veterinary doctor in el-Arish, according to Daily News Egypt. Witnesses said the militants shot Bahgat William Zakhar as he left his private clinic in the evening. 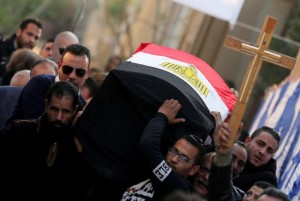 World Watch Monitor said officials have linked this month’s attacks to a regional offshoot of the Islamic State group, formerly known as Ansar Beit al-Maqdis. The Islamic extremist group pledged allegiance to Islamic State in 2014. It is the most active terrorist group operating in Egypt, claiming frequent killings and kidnappings in northern Sinai cities. The region became a stronghold for extremist groups after the 2011 uprising that overthrew former President Hosni Mubarak.

Egypt’s Christians make up about 10 percent of the country’s population and have long complained of discrimination, saying they are denied jobs and land rights because of their faith.

Christian Solidarity Worldwide (CSW) yesterday released a report revealing continued suppression of freedom of religion and belief in Egypt. The report noted an increasing number of blasphemy cases and similar offenses presented in court. Sectarian tensions continue between Muslims and Christians, but the attacks against Coptic Christians are “disproportionately high,” it said.

CSW acknowledged the Egyptian government’s efforts to combat extremist groups, but called for legislation that clearly provides for freedom of thought, conscience, religion, and belief, in compliance with international standards. The advocacy group also called for a review of all blasphemy cases.

“We remain deeply concerned by the increasing restriction of space for independent civil society, which has also had a negative impact on the full enjoyment of freedom of religion or belief,” said Mervyn Thomas, chief executive of Christian Solidarity Worldwide.