(WNS)–New discoveries about the universe are popping up in rapid-fire succession, prompting renewed hope among scientists searching expectantly for some sign that earthlings are not alone.

Within the last three weeks, two discoveries have piqued the interest of would-be alien hunters. First, scientists announced the discovery of an Earth-sized planet in our own cosmic backyard, merely 4.2 light years away. The planet, Proxima b, orbits Proxima Centauri, the star closest to our solar system. 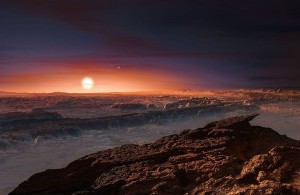 A few days later, news broke that scientists in Russia had detected a star, about the size of our sun, emitting an unusual signal from 95 light years away.

The two discoveries sparked an initial flurry of excitement for those who long to find ET. Proxima b orbits close enough to its star to have enough potential heat to sustain liquid water, and the planet probably is rocky like our own. Could it support life? And could the Russians’ mysterious signal be aliens sending us a message?

Scientists who believe in the theory of Darwinian evolution reason that if life evolved on Earth by mere random chance, then it must have evolved elsewhere, too. Evolutionists are desperate to show Earth is just one of thousands of planets that could potentially support life, Ken Ham, president and founder of Answer in Genesis, wrote on the organization’s blog: “In their view, we can’t be unique or special because we’re just a cosmic accident.”

But most experts who believe the universe was created also believe Earth is indeed unique, a privileged planet especially designed to support life. And those who hope otherwise are often disappointed by initially exciting scientific discoveries.

Several scientists already think it highly unlikely Proxima b could support life. They note only a slim chance the planet has an atmosphere that can hold heat and water, and its star periodically erupts with potentially deadly flares of radiation that bombard Proxima b with X-ray blasts more than 400 times stronger than those with which our sun pelts the Earth. Astronomers also believe the planet may be tidally locked to its star, meaning it’s always sunny on one side of the planet and always dark on the other.

Other scientists see nothing exceptional about the signals picked up by the Russian astronomers. Researchers detected the signal in only one of 39 passes using a radio telescope. Many things, like satellite communication, military operations, and natural phenomena, could account for the signal, which did not repeat or pulse in any way that would suggest it carried coded information.

“Of course there is always a possibility that it is an extraterrestrial signal, but nothing about it thus far makes me really think that there’s more than a one-in-a-million chance that it is,” Eric Korpela, a researcher at the University of California, Berkeley, who studies extraterrestrial intelligence, told The Washington Post.

And now, even some secular scientists are hopping aboard the Earth-is-a-privileged-planet train. Ethan Siegel, an astrophysicist at Lewis & Clark College in Portland, Ore., concluded in an op-ed for Forbes magazine that humanity may well be alone in the universe.

Evolutionary theory requires three big steps to occur before a technologically advanced, human-like civilization can develop, he explained. First, a few hundred specific proteins must be present at the same time and in the same location and must combine together to form a living cell. Second, that cell must somehow survive long enough to evolve into complex, multi-celled organisms, which must then evolve into intelligent creatures.

“And even if life does occur, how fortunate do you need to be to have it survive and thrive for billions of years?” Siegel asked.

Lastly, the intelligent life must become a technological civilization with the ability to announce its presence to the universe, or at least to be able to listen for other forms of intelligence.

All things considered, even “from a materialistic, evolutionary perspective, our technologically advanced civilization is almost certainly unique in the universe,” biophysics researcher Kirk Durston wrote for the blog Evolution News.

The improbabilities of life in the universe leave only two choices, Durston noted: Either earthlings won a lottery against mind-staggering odds, or “there is a Creator of the cosmos who has a purpose in mind for humanity.”