Even them will I bring to my holy mountain, and make them joyful in my house of prayer: their burnt offerings and their sacrifices shall be accepted upon mine altar; for mine house shall be called an house of prayer for all people. Isaiah 56:7

The nascent Sanhedrin and the Mikdash (Temple) Educational Center are organizing the World Creation Concert due to be held on September 3 at the Jerusalem Archaeological Park – Davidson Center and the Hulda gates adjacent to the Western Wall Plaza in Jerusalem. This falls one day before the 25th of the Hebrew month of Elul, the 5778th anniversary of the creation of the world according to Jewish tradition. 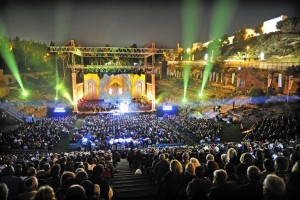 “Creation began at the even shtiya, the foundation stone under the Holy of Holies,” Mordechai Persoff, head of the Mikdash Educational Center, a non-profit organization for education about the Temple, told Breaking Israel News. “It is only fitting that all the nations should join together to pray at the Temple Mount.”

Persoff feels that the time has come for such an event.

“The prophecies are coming to life,” he said. “This event, predicted in the Bible, is happening now in Jerusalem. This is the one thing we can all agree on; we were all created by God. We all owe him our gratitude for that. That is the essence of creation and the essence of Rosh Hashanah (the New Year).”

“This concert is a call to prayer for all nations, to come together to praise God in Jerusalem as nations and not as religions,” said Rabbi Hillel Weiss, spokesman for the Sanhedrin told Breaking Israel News. “This was the intention of King Solomon when he established his Temple.”

Weiss cited the section of the Bible describing the dedication of the Temple.

Oh, hear in Your heavenly abode and grant all that the foreigner asks You for. Thus all the peoples of the earth will know Your name and revere You, as does Your people Yisrael; and they will recognize that Your name is attached to this House that I have built. I Kings 8:43

“This concert is a way to bring all of the nations together to praise God,” Rabbi Weiss said. “This is an event organized by Orthodox Jews but it does not belong to any religion. We are acting in our prophesied role as a Kingdom of Priests, serving the nations in order to enable them to serve Hashem.”

Rabbi Weiss sees this as a necessary step to cope with the problems facing the world today.

“The entire world is in danger: ecologically and militarily,” Rabbi Weiss said. “This is universal and common to all nations. God charged Adam, the first man, to care for the world and protect it. This is a universal mission incumbent upon every person that we are failing.”

Rabbi Weiss emphasized that all efforts to join the nations of the world to date have generated more damage than good.

“The Torah teaches how nations should relate to each other,” he noted. “Any effort to bring the nations together that is not based in the Bible will cause harm. We see this today in the United Nations. Despite their lofty claims, they do nothing to prevent suffering in the world. They have become nothing more than a political tool for evil. The nations need to come together anew in a manner that is based in the Biblical concepts that are the basis of all of creation.”

Rabbi Weiss brought a Biblical source for this claim.

And the many peoples shall go and say: “Come, Let us go up to the Mount of Hashem, To the House of the God of Yaakov; That He may instruct us in His ways, And that we may walk in His paths.” For instruction shall come forth from Tzion, The word of Hashem from Yerushalayim. Thus He will judge among the nations And arbitrate for the many peoples, And they shall beat their swords into plowshares And their spears into pruning hooks: Nation shall not take up Sword against nation; They shall never again know war.Isaiah 2:3-4

“The only hope for world peace, for beating spears into pruning hooks, is if this universal justice and move towards peace comes out of the Bible and Jerusalem,” Rabbi Weiss stated.

The call for the nations to join together is being answered. Persoff stated that several high-ranking diplomats have committed to attending. Guatemala is sending a large delegation including their ambassador. Guatemala moved their embassy to Jerusalem on May 16, two days after the U.S. opened their embassy in Jerusalem. The President of Honduras is making a special trip to Israel to attend the concert. Also present will be the ambassador of Colombia. The organizers are still waiting for representatives from several other countries to commit to attending.

In recognition of his bold step, the Sanhedrin and Mikdash Educational Center minted a special coin, presenting it to the President of Honduras.

To facilitate the universal aspect of the concert, the organizers have arranged several different manners for people to participate. A limited number of tickets are available to attend in person. Several television stations around the world will broadcast the event live. If this is unavailable, people can obtain a link to the live broadcast for a small fee on the concert’s website.

But the most interesting option is available free of charge. People can sign up to be what the organizers refer to as “Points of Praise.” Individuals and organizations can sign up as representatives of a local group of like-minded friends and families who will gather and watch the live broadcast together online. Their goal is simply to have God be praised by all nations around the world.