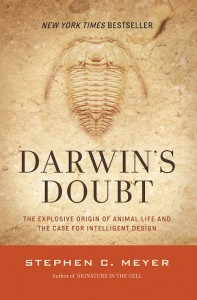 HOUSTON, Texas, — Cosmos, the latest attempt at materialist indoctrination of the public, recently finished its 13-week television run. A reboot of the 1980 miniseries co-written and presented by the late Carl Sagan, it was a spectacle of historical misinformation and blatant atheistic propaganda that even included Sagan’s famous declaration, “The cosmos is all that is, or ever was, or ever will be.” The worldview implication is evident: that there is no mind behind the material world and that mankind is nothing more than a cosmic accident, a bi-product of purposeless, undirected physical processes. This sharply conflicts with the Judeo-Christian worldview in which man, intentionally made in the image of God, is the crown of creation.

Some viewers of Cosmos may have wondered: does science truly point to a godless universe? Is there no evidence of a designer’s hand in the natural world? That’s what the creators of the program set out to communicate it seems, but one glaring omission was any attempt on their part to answer one of the most important scientific questions: how did the biological information necessary for life originate? The answer is fundamental to determining the correct worldview. Are blind material processes sufficient to explain life, or is there evidence of a mind behind the matter?

Thankfully, not all theorists avoid the biological information question. In Darwin’s Doubt: The Explosive Origin of Animal Life and the Case for Intelligent Design, Dr. Stephen Meyer tackles that issue head-on and makes a compelling argument for intelligent design. The book’s release in June, 2013 shook the evolutionary biology and paleontology communities, and the aftershocks persist. Darwin’s Doubt made an impressive debut at the number seven spot on the New York Times bestseller list for nonfiction and has been hailed as “an accurate and comprehensive review of the evidence” and “a game-changer” by scientists in fields such as paleontology, genetics, and biology. Meyer’s central thesis stands in direct opposition to the materialist view by claiming that open-minded scientific evaluation of living things and natural history strongly suggests a transcendent intelligence.

In his book, Meyer explores the history, mystery, and current scientific state-of-affairs surrounding an event known as the Cambrian explosion. In a geological blink of an eye, the vast majority of animal phyla appear in the fossil record without viable evidence of evolutionary precursors. Charles Darwin was acutely aware of (and troubled by) this conundrum. In the ensuing century and a half since his Origin of Species was published, the Cambrian dilemma has only intensified. It presents a grave problem for evolutionary theory–the problem of the origin of the biological information needed to launch such a monumental zoological revolution.

Meyer contends that unguided natural selection acting upon random genetic mutations cannot explain the influx of biological information necessary for the Cambrian explosion. What makes his case particularly powerful is that it is built upon a broad range of respected, peer-reviewed scientific publications. He examines the latest evidence from evolutionary and developmental biology, genetics, and epigenetics in order to highlight the severity of the problem and demonstrates that materialist attempts to explain it away often beg the question, miss the point, or rely upon phantom “data.”

The new, expanded edition of Darwin’s Doubt includes a substantial epilogue in which Meyer offers a thorough response to the book’s critics. Unfortunately, the vast majority of detractors never addressed the central arguments of the book. In fact, even the writers of some high-profile, oft-cited negative reviews seem to have not engaged most of the material. But a few scientists did, notably UC Berkeley paleontologist Charles Marshall, who wrote a respectful rebuttal to the book in the September 10th edition of the prestigious academic journal, Science, last year.

Marshall argued that new animal body plans could arise through the rewiring of gene regulatory networks, the genetic programs that guide early animal development. Meyer’s response is that the experimental data have demonstrated that mutations in these genes are always fatal to the organism, and that moreover, Marshall hasn’t offered an explanation for the origin of the pre-existing genetic and epigenetic information his explanation presupposes. Meyer explains why Marshall’s (and others’) counterarguments not only fail, they inadvertently offer extra support for Meyer’s thesis.

Ultimately, the materialist theories offered by critics of Darwin’s Doubt have done nothing to diminish the problem of the origin of biological information. Experience has made it clear, Meyer argues, that only minds produce information. Thus, intelligent design remains the best explanation, not only for the Cambrian information explosion, but for all of life. We are no accident.