Recently Liberty News revealed how the Obama Administration has been funneling tens of millions of dollars into Catholic and Baptist churches and charities for the purpose of preparing for the Obama Invasion of unaccompanied minors. 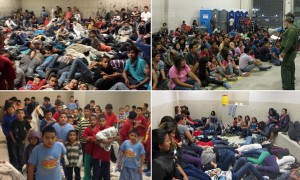 –Over a three-year period (2010-2013), the Catholic Charities Diocese of Galveston received $15,549,078 in federal grants from Health & Human Services for “Unaccompanied Alien Children Project”‘

–In 2013, the Catholic Charities Diocese of Fort Worth received $350,000 from DHS for “citizenship and education training” with a program description of “citizenship and immigration services.”

This is explosive. This is just the tip of the iceberg. This is definitive evidence that the current flood of unaccompanied minors is a planned policy decision by the Obama Administration that was in the works for several years. Winning over religious groups has been a key part of Obama’s amnesty agenda. He knew he needed the faith and “compassion” angle to sell amnesty to Americans. We have seen Obama’s strategy at work for years behind the scenes among conservative and evangelical groups we know. Now, we have clear evidence that Obama has been manipulating religious groups by greasing their palms with tens if not hundreds of millions of taxpayer dollars.

And these are the same guys who complain so vociferously about “separation of church and state”!

Two Things You Can Do Today…

1. Read the report and share it with your friends on Facebook. Liberty News broke this story. So far, none of the major news outlets (even conservative sites like Drudge) have picked up this story. But word is spreading. As I write, more than 9,000 people have shared our Liberty News story. Please read and then share.

2. If you haven’t done so already, please sign Grassfire’s “Stop Obama’s Invasion” petition. It takes just a few moments to sign. The petition is a crucial rallying point in building a coalition of citizens and showing leaders in Congress that The People are ready for action.

Once again, thank you for your partnership. Everything Grassfire and Liberty News have done this week would not be possible without friends like you. Eric got the tip on this story because you helped send him to Murrieta!

Most importantly, thank you for “standing on the wall” for our nation. I know at times it may feel like you are standing alone. First of all, that’s what it may take at times — each of us being willing to stand alone. But I can tell you from my vantage point of being able to speak to hundreds of millions of patriots every day, you are not alone. And we can… we must… win this fight for the soul of our nation.