As protesters demand democracy in Hong Kong, churches there are divided over whether to support the marchers

(WNS)–When Wu Chi Wai attended seminary in then-British colony Hong Kong in 1980, he took part in passionate discussions about universal suffrage, the ideals of a one-man-one-vote system, and the opportunities for democracy to take root in Hong Kong. More than 30 years later, those ideals are still dreams for the university students at Pastor Wu’s church.

Starting Sept. 26 tens of thousands of dreamers, both young and old, inundated the island’s main throughways to protest Beijing’s tightening control over the region. Police response varied throughout the weeks-long protests, yet standoffs between police in riot gear and protesters shielding themselves with umbrellas gave the protests the name “The Umbrella Revolution.” 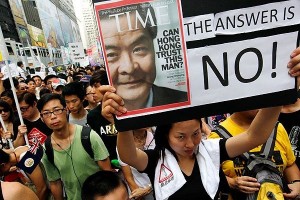 Amid the undulating crowd, Wu and about 50 other pastors and seminary students took shifts standing with a 20-foot-tall white cross. They offer prayer, spiritual counsel, and advice to the protesters “to demonstrate God’s presence among them.” Groups of Christians holding signs saying “Lord give us peace” gathered to read the Bible and sing hymns. Some churches opened their doors as support centers, allowing protesters–regardless of their political persuasions–a place to pray, rest, and use bathrooms.

Christians make up about one-fifth of Hong Kong’s population and play a significant role in the democracy movement, yet churches remain divided about how to respond to the restive political climate.

WHILE THE COMMUNIST REGIME in mainland China ostentatiously quashed Christianity in the late 1940s, Christianity flourished in Hong Kong under British rule. Churches and missionaries provided much-needed education and social services to a stream of refugees fleeing from mainland China. Even today Christian groups run about half of all public schools.

In 1997 Britain handed Hong Kong over to China, raising fears among Hong Kong Christians that Beijing would clamp down on their freedoms. But instead the Chinese government allowed Christians to continue meeting, evangelizing, and serving the community. With tensions eased, Beijing presented Hong Kong pastors an offer many couldn’t refuse: access to mainland China’s expansive mission field through a partnership with the government-sanctioned Three-Self church.

Francis Yip, a professor at Chung Chi Divinity School of the Chinese University of Hong Kong (CUHK), said before the handover Christians didn’t know how they could evangelize on the mainland: “But the success of the befriending policy of the Communist Party toward the evangelical church means that they now have … opportunities to do their work in China.” Hong Kong pastors have developed relationships with Three-Self church pastors, met with officials, trained pastors, and even built a harmony theme park in Northeast China.

In return for access, those pastors stopped criticizing the central government, kept politics out of the pulpit, and overall became pro-establishment. They enjoyed a high level of religious freedom and didn’t want to rock the boat and lose access to what Yip calls “the great opportunity of spreading the gospel in mainland China.”

Some Christians saw worrisome changes after the 1997 handover, especially related to church-run schools. Yip said the government required schools to establish management boards to keep them independent from their sponsoring bodies, and limited to 60 percent the number of board members who could come from the church.

Last year tensions between Hong Kong and China ramped up again. China-backed companies strong-armed newspapers that spoke out against the government. Pro-democracy journalists faced knife attacks. In June, Beijing released a white paper reminding Hong Kong that the central government has “comprehensive jurisdiction” over Hong Kong, and that the “high degree of autonomy enjoyed by Hong Kong is subject to the central government’s authorization.” On July 1, Occupy Central with Love and Peace, whose leadership includes Rev. Chu Yiu-Ming and outspoken Christian Benny Tai, staged a peaceful sit-in to commemorate the 17th anniversary of Hong Kong’s handover. Half a million people jammed the roads, and police arrested 500 protesters who refused to leave.

The precipitating event of the current protests occurred on August 31, when China announced that a committee filled with Beijing loyalists would determine how many and which names appear on the 2017 ballot for chief executive. While some pragmatic Hong Kong residents resigned themselves to that development, Occupy Central saw the move as the beginning of a long fight.

On Sept. 22, about 13,000 college students started a week-long boycott. Secondary-school students joined them for a one-day protest at the end of the week. Unwilling to leave the protesting to students, Hong Kongers from both sides of the Victoria Harbor joined them on the streets. A sea of protesters washed over the main roads in the financial district, calling themselves “Hong Kong People,” rather than Chinese people, and demanding the removal of Chief Executive Leung Chun-ying: They saw him as a puppet of Beijing.

After first responding with tear gas and pepper spray, the police backed down as Leung acknowledged the protests will “last for quite a long period of time.” In the ensuing weeks, scuffles broke out between protesters and masked groups of anti-Occupy Central activists, some linked to the infamous Hong Kong triad gangs. Government officials backed out of promises to meet with protest leaders, shattering hopes of a speedy resolution.

AT THE HELM of the student movement is the bespectacled 17-year-old Joshua Wong, whose group Scholarism stopped China from slipping communist propaganda into Hong Kong schools in 2012. In a Facebook post, Wong said his Christian faith was the motivation behind his pro-democracy activism. He mentions how his father taught him from a young age to care for the “forgotten ones in the community” who had never heard the gospel, as well as Christians in China who were oppressed for their faith: “Without faith, I wouldn’t have realized that we have to search for the value of life, to respect every individual as equal.”

The heavy involvement of college students and young people in the current democracy movement is reminiscent of China’s own student protests a quarter century ago that led to the infamous crackdown at Tiananmen Square. Back then, the Hong Kong church united in protesting mainland China’s brutal actions, and Occupy Central’s own Rev. Chu and other church leaders helped Chinese student leaders escape into Hong Kong.

This time, churches are more varied in their responses. The Catholic and Methodist churches have offered the most vocal support to Occupy Central, with the Anglican church at the other end of the spectrum. In July, Anglican Archbishop Paul Kwong accused protesters of having a herd mentality and urged Christians to stay quiet as Jesus was quiet before his crucifixion. Critics note that Kwong is a member of the Chinese People’s Political Consultative Conference, an unelected advisory group for the Chinese Communist Party.

Some Christians cite chapter 13 of Romans to discredit the civil disobedience strategy of Occupy Central. Others question the movement’s effectiveness, since the Chinese government has already decided on the law. Still others argue that churches should focus on ministry and evangelism and not get entrenched in politics. Most churches do not take an official position, but a growing number are opening their doors to weary protesters and praying for peace in the city.

PROFESSOR YIP says Christians need to be involved in the debate. He’s written a confession signed by more than 4,000 Christians that calls for the church to take an active stand against things that are wrong while respecting both supporters and opponents of Occupy Central. He doesn’t think China will come tearing down church crosses in Hong Kong, as it has in Zhejiang province, but he can imagine Beijing undercutting churches that have been more outspoken against the government.

Pastor Wu isn’t as optimistic. He believes the Hong Kong church will eventually be treated exactly like the churches in mainland China: “Now we have to face the oppressive Chinese government, and so when we say that we fight for democracy, we fight for our human dignity.”

Wu, who works with Hong Kong Church Renewal Movement, says that as God loved the world, so Christians must love the world and be involved with it: “We should engage in the public affairs, and we should not leave this to other people. If we retreat, we can see more evil or sins in the public area.”