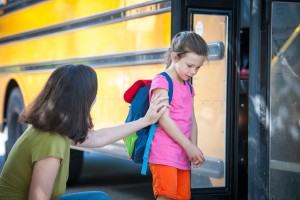 One of a series of First Day of School images, showing a young girl going through the emotions of getting on the bus for the first time.

Proposed policy would require schools to allow kids to select their own name, gender, and race

(WNS)–Delaware is pushing a new state regulation that would allow children to self-select their name, gender, and race without parental consent.

The policy, proposed earlier this month by the state’s Department of Education, would allow public schools to bypass parental consent to student changes involving “protected characteristics,” including race, gender, and sexual orientation, if the school deems the parents unsupportive.

Advocates call the regulation an anti-discrimination policy that protects children, but pro-family groups say it undermines families and pushes a false narrative about gender and race.

Nicole Theis, president of Delaware Family Policy Council, said parents who affirm their child’s biological sex and race are now considered “a ‘non-ally’ and unsupportive, discriminatory, even abusive,” noting what is considered “unsupportive” behavior by parents is open to interpretation by school administrators.

The policy is the result of the “deliberate conditioning of children as young as preschool into believing they can deny biological facts and realities and identify as whatever gender or race they feel,” she said.

Jeff Johnston, an issues analyst for Focus on the Family, called the Delaware regulation an “attack on parental rights” and an extension of what has been happening in the classroom for years, as parents have been pushed to the sidelines by those who believe “children are not the responsibility of their parents and that educators are more equipped and knowledgeable than parents.”

The proposed Delaware rule also requires schools to provide access to the locker rooms and restrooms that correspond to a student’s gender identity or expression, and opens all school sports to any student based on their perceived gender identity. Critics rightly argue these policies threaten the safety and privacy of students, as well as the basic fairness of athletics.

Parents and state legislators are pushing back against the regulation, urging Delaware residents to express their criticism to the Education Department during the public comment stage of the proposition, which ends Dec 4.