(WNS)–The first hearing of the House Select Investigative Panel on Infant Lives on Mar. 2 revealed a deep partisan divide between pro-abortion lawmakers claiming Congress has better things to do and pro-life House members concerned about the morality of an industry harvesting baby body parts from abortions.

Republicans came to the hearing armed with exhibits and prepared lines of questioning to get to the bottom of what is happening in an alleged fetal-tissue-for-profit industry involving abortion provider Planned Parenthood, which was exposed by undercover videos released by the Center for Medical Progress last summer. Committee chairwoman Rep. Marsha Blackburn, R-Tenn., made her intentions clear from the start: “This is … about bioethics. We did not invite our guests here to debate election year politics or journalism ethics or whether this select panel should be funded.”

But that did not stop Democrats from attempting to undermine Blackburn and other GOP members of the panel.

Rep. Jerrold Nadler, D-N.Y., probed Blackburn about subpoenas she delivered last month to several researchers in the biomedical field. Nadler claimed the committee could be “complicit” in the harm of those researchers if their names became public, pointing to the November shooting at a Planned Parenthood facility in Colorado.

“False allegations from anti-abortion extremists is putting Americans in harm’s way,” said Rep. Jan Schakowsky, D-Ill., the committee’s top Democrat. “We are looking at a partisan ideological battle against abortion.” 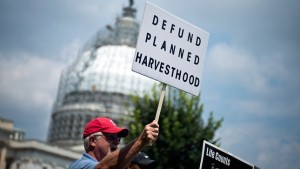 Democrats moved to quash the subpoenas, but the motion failed along party lines. Eight Republicans and six Democrats make up the select panel.

Four of the six witnesses at Wednesday’s hearing agreed with the Republican committee members, testifying that it is unethical to use tissue from aborted babies for medical research.

“Because we know that the fetus is alive and human, we must find some explanation for why it should not be treated with the same dignity that we accord all other human lives,” said Gerard Kevin Donovan, a physician and bioethics professor at the Georgetown University School of Medicine. “This is a stark fact that makes such scientific endeavors controversial.”

Pro-abortion lawmakers attempted to discredit Donovan and the other like-minded witnesses, claiming they were “philosophically opposed to abortion.”

Republican committee members presented as evidence several emails showing communication between abortionists and fetal-tissue buyers and the consent form given to women to donate their baby’s body parts post abortion.

Rep. Diane Black, R-Tenn., suggested a particular series of emails equated the selling of dead babies to a retail business: “There effectively is an Amazon.com for human parts, including entire babies.”

Rep. Andy Harris, R-Md., held up the form that boasted that donated tissue “has been used to treat and find cures for” multiple diseases.

“We have really found a cure for diabetes, Parkinson’s, Alzheimer’s, cancer and AIDS?” Harris asked. “Because that is exactly what this form says.”

Lawrence Goldstein, a professor at the University of California, San Diego, was the only cell-based researcher invited to testify Wednesday. He said fetal tissue and cells that would otherwise be discarded after abortions play a vital role in modern medical research. But he failed to deliver specific examples of cures developed from fetal-tissue research.

Goldstein said he has used fetal tissue to explore cures for multiple ailments, and even hopes the cells could help grow new organs one day. But he agreed the consent form was misleading because there are no cures yet for Alzheimer’s or Parkinson’s disease.

“We need all different types of cells to do research, because we don’t know what is best,” Goldstein added.”

Rep. Larry Bucshon, R-Ind., a heart surgeon, asked the scientist where he gets the tissue he uses for his research and who is profiting from its sale.

“Many people in this hearing have said, ‘It’s going to be discarded anyway,’ but then how come we are selling it and making a profit?” asked Bucshon. “It makes no sense to me why organizations want to be involved in this if there is no money.”

Democrats on the panel held a press briefing afterward claiming the hearing was a “witch hunt” and a “charade” designed for Republicans to attack abortion laws. They even advocated disbanding the committee.

But Blackburn told reporters she is pleased with the panel’s work and plans to speak with more scientists about the ethics of fetal-tissue research.

“It’s unfortunate,” Blackburn said of Democrats criticizing her motives. “Because what we’re focused on is the protection of life.”