Did you hear about the joke that nobody heard? 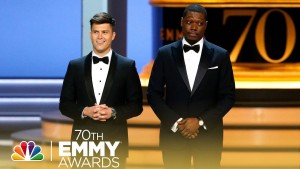 If you watched the Emmy’s over the weekend, you’re one of the few who tuned in to watch “Saturday Night Live” comedians poke fun at faith and prayer.

The awards show, where the TV industry pats itself on the back, had no shortage of actors acting like political pundits – and it’s no surprise they all hated on President Donald Trump.

But there was one moment that was probably especially galling to Christians. SNL actor Michael Che joked his mom was not watching the telecast because no one on the stage thanked Jesus. “The only white people that thank Jesus are Republicans and ex-crackheads,” he joked.

Yet conservative activist Jeff Crank tells OneNewsNow there may be more conservatives and Christians in Hollywood than are willing to admit it. “They’ve created a culture where, as a conservative, you’ll be blacklisted if you come out as a conservative,” he says. “And so very few people do and it sort of self-perpetuates.”

Reacting to the remark, Turning Point USA spokesperson Candace Owens told Fox News she has an idea why the joke was spoken in that gathering. “Wherever there is an overwhelming presence of liberals,” she said, “there always seems to be the purposeful omittance of God.”

Che’s SNL partner Colin Jost observed from the stage, that Che’s mom wasn’t the only one missing the telecast. “We just want to say a quick hello to the thousands of you here in the audience tonight,” he joked, “and to the hundreds watching at home.”

The broadcast pulled a 2.4 Neilson rating, its lowest ever.