WASHINGTON – A new documentary two years in the making – “What Would Muhammad Do? Islamic Terrorism Explained” – exposes the truth about Islam, the Quran, and Muhammad – the Founder of Islam. Recent attacks in Germany, France, and Belgium are the inevitable fruit of Merkel’s suicidal immigration policies which opened the door to Islamic expansion into Europe.

Muslim terrorists have not hijacked the “peaceful religion of Islam.”  As this documentary shows, Muslim terrorists are carrying out the instructions of Muhammad, and imitating the bloody example he left.

“What Would Muhammad Do?” uses only primary Islamic sources to reveal the agenda and tactics of Islam, as commanded by Muhammad. 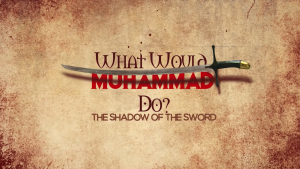 Every citizen of Europe who cares about the survival of Western Civilization should watch this series.

In order to stand in solidarity with the citizens of Europe, the producers of “What Would Muhammad Do?” have added French and Dutch subtitles, and have begun German subtitles which will be released shortly.

Producers are making the first episode of the movie series available online at no charge – “kostenfrie.”

Reviews of “What Would Muhammad Do?”

“Randall Terry’s 10 part documentary ‘What Would Muhammad Do?’ (WWMD?) is a visually engaging masterpiece explaining the truth about Islam. WWMD? uses primary Islamic sources (Quran, Hadiths, and Siras) to definitively spell out Islamic doctrine. This spectacular documentary is the best I’ve seen…perfect for students, persons of all faiths – including Muslims – who will find it even more revealing!” — Lt Col Roy White (ret), Chapter Coordinator, ACT! for America San Antonio

“I learned more from ‘What Would Muhammad Do?’ about Islam and Islamic terrorism than I’ve learned from everything I ever read and watched in my entire life.” — John Moore, Author, Speaker and Radio Talk-Show Host