Wrapped in jackets and blankets, thousands of people gathered at Britain’s Stonehenge for summer solstice, watching the sun rise over the Neolithic monument and welcoming the longest day of the year.

Revelers of all ages, including druids and pagans performing rituals, clapped and cheered as the sun rose at 0352 GMT on Thursday over the prehistoric site made up of huge standing stones in the southwest county of Wiltshire. 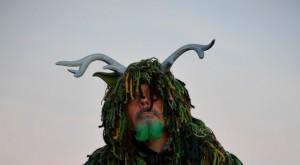 A reveler waits to welcome in the Summer Solstice at Stonehenge stone circle in southwest Britain. (REUTERS/Toby Melville)

Some sang or beat drums while others performed yoga.

Each year, thousands of people arrive at the Stonehenge for the occasion, and this year, around 9,500 people were present, according to Wiltshire police.