NASHVILLE (BP) — Nearly 100,000 people have signed an online petition asking the TLC network to cancel the popular reality show “19 Kids and Counting,” contending that its stars, Jim Bob and Michelle Duggar, use their fame “to promote discrimination, hate, and fear-mongering against gays and transgendered people.”

The Duggars have 19 children and are outspoken advocates of their Christian faith as well as pro-family public policies. Their television show debuted in 2008 as “17 Kids and Counting,” since which time they have had two more children. Speaking at Southwestern Baptist Theological Seminary last year, the Duggars said they stopped using birth control pills after the drugs caused Michelle to experience a miscarriage years ago.

The petition to cancel the Duggars’ show was launched by Jim Wissick of San Jose, Calif., at the website change.org and apparently stems from the Duggars’ opposition to a Fayetteville, Ark., ordinance that provides civil rights protections for lesbians, gays, bisexuals and transgender (LGBT) individuals. Fayetteville’s city council approved the ordinance in August, but opponents gathered enough signatures from city residents to place the ordinance before voters during a special election Dec. 9. 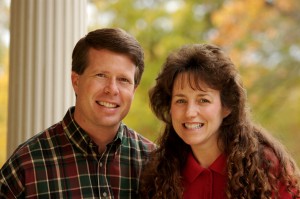 A counter-petition in support of the Duggars was launched Nov. 20 at LifeSiteNews.com. According to that petition, “We need to launch a counter-attack, letting TLC know that the American people stand by the Duggars and their defense of traditional family values. Rather than being extreme, the Duggars represent the majority of people in state after state who have stood up for the traditional family. The real extremists are those who are demanding that a TV network penalize America’s beloved family because they support the truth about family, which they have always expressed in a loving, compassionate fashion.”

Prior to the city council’s approval of the ordinance, Michelle Duggar placed a robocall to northwest Arkansas residents warning, as quoted by Wissick, “The Fayetteville City Council is voting on an ordinance this Tuesday night that would allow men — yes I said men — to use women’s and girls’ restrooms, locker rooms, showers, sleeping areas and other areas that are designated for females only. I don’t believe the citizens of Fayetteville would want males with past child predator convictions that claim they are female to have a legal right to enter private areas that are reserved for women and girls.”

Duggar’s words “reek of ignorance and fear mongering,” Wissick wrote. “Just because someone is transgendered doesn’t mean they are a child predator or a rapist.”

Wissick added, “The Duggars have thrown massive amounts of money to repeal this law so business owners and land lords can evict and fire people solely over gender identity and sexual orientation! They need to be taken off the air!”

The Duggars’ oldest son Josh, who is executive director of the Family Research Council’s legislative group, drew criticism from Wissick for being employed by “a hate-filled, anti-gay organization.”

The Duggars’ Facebook page also has been the subject of criticism from gay activists, according to CBS News. Earlier this month Jim Bob and Michelle posted a photo of themselves kissing along with the caption, “God designed marriage to be a loving, dynamic relationship between a husband and wife for a lifetime. God loves marriage and it is supposed to be full of love, joy, fun and romance. We challenge all married couples to take a happily married picture and post it here.”

John Becker, of the LGBT blog The Bilerico Project, posted a photo of himself kissing his homosexual partner along with a message advocating gay marriage. The Duggars removed the photo and banned Becker from their Facebook page, CBS News reported.

On Twitter, Josh Barro, a reporter for a New York Times section called TheUpshot and an MSNBC contributor, wrote, “Anti-LGBT attitudes are terrible for people in all sorts of communities. They linger and oppress, and we need to stamp them out, ruthlessly.”

“So let’s lay all the facts out as simply as possible:

“3) According to Jim Wissick and the petition signees, the Duggars’ beliefs — and by extension, the beliefs of tens of millions of Americans — are evil.

“4) Entertainment companies like TLC have a moral duty to not give employment or platform to people whose beliefs about sex are evil.

“5) Therefore, TLC should behave morally and cancel the Duggars’ popular show in order to avoid spreading evil beliefs among the viewing public.

“Read over that sequence carefully, and then ask yourself: Who is trying to force their beliefs on others here?”

TLC has not commented on Wissick’s petition, according to the Huffington Post.