(WNS)–Less than six weeks after Quebec legalized euthanasia, Britain’s House of Lords is considering its own euthanasia endorsement. Brought by Lord Falconer, the Assisted Dying Bill would allow doctors to administer poison to terminally ill patients given less than six months to live. Lawmakers will debate the measure during a second reading Friday.

But the bill won’t pass without a fight. Bioethicist Theo Boer, once a supporter of euthanasia in the Netherlands, the world suicide capital for 12 years, told the chamber last week the evidence shows he “was wrong, terribly wrong.”

Boer, who sits on a Dutch government committee that reviews all euthanasia cases, said his native country may top 6,000 assisted suicides this year. In comments reprinted by The Daily Mail, Boer pleaded with parliamentarians, “Don’t do it, Britain.” The very existence of a euthanasia law seems to be “an invitation to see assisted suicide and euthanasia as a normality instead of a last resort,” he said.

The practice has been legal in the Netherlands since 2002, and Boer was a vocal supporter in 2007 as numbers stabilized at roughly 2,000 euthanasia deaths per year. His colleagues believed they had achieved the regulatory balance that, as American abortion supporters say, made the practice safe, legal, and rare. 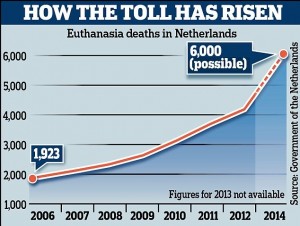 How The Toll Has Risen

But the yearly numbers have more than doubled. Today, nearly 1 in 7 deaths in the Netherlands happens at doctors’ hands. At least 3 percent of deaths come by direct euthanasia, The Daily Mail reports, and another 12 percent come from passive euthanasia, when a person is sedated and starved to death.

Boer cited a rapid increase in doctors killing the mentally ill, the depressed, and the lonely elderly. The Dutch have also authorized traveling euthanasia units, morbid house calls that bypass doctors with knowledge of the pressures or motives behind a patient’s suicide decision.

Pressure from relatives or fears of being a burden are documented factors people give for choosing euthanasia in the Netherlands. “Not even the review committees, despite hard and conscientious work, have been able to halt these developments,” Boer said. The professor of ethics, bioethics, and theological ethics at Utrecht University and Protestant Theological University, said euthanasia “is on the way to become a ‘default’ mode of dying for cancer patients.”

Britain’s Dignity in Dying group claims Boer’s concerns are invalid because the proposed law is limited to the terminally ill. A similar law in the U.S. state of Oregon “has been working safely for over 17 years” and still only applies to the terminally ill, a spokesman toldThe Daily Mail.

But Boer says activists won’t rest until lethal pills are freely available to anyone over 70. And back in Oregon, some Medicaid patients have received letters implying the program wouldn’t pay for life-prolonging treatments prescribed by their doctors, but would pay for lethal prescriptions. “Some slopes truly are slippery,” Boer said.

The slopes are already well-greased in Britain. The British Supreme Court in June upheld the current euthanasia ban, but a majority of judges suggested Parliament change the law. Furthermore, judges ruled a ban is likely “incompatible” with Europe’s human rights law. Activists told the Guardian they’re looking forward to further court rulings, and they’re disappointed the Falconer bill only covers the terminally ill. They are “the lucky ones,” one activist said.