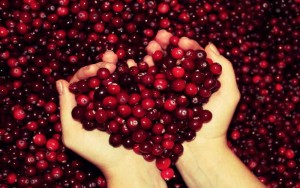 (NaturalHealth365) Food scientists are exploring the role that cranberries play in gut health, as well as the balance of the gut microbiome. In fact, researchers out of the University of Massachusetts Amherst have found that a beneficial strain of gut bacteria is nourished and grows when fed a specific, normally indigestible carbohydrate found in cranberry.

Cranberry was also found to exhibit a special nontypical metabolism in the gut microbiome that contributed to gut health. And, for those new to this kind of information: the ‘gut microbiome’ refers to our intestinal region – which is essential for nutrient absorption plus overall metabolic, brain and immune system health.

Food scientists have been paying special attention to prebiotics of late. Prebiotics refer to molecules that can be consumed, but are not digested. They also promote the growth of beneficial microorganisms in the gut microbiome.

The foods we eat not only bring a certain level of nutritional benefit; they also either help or hinder the function of our gut microbiome. It’s worth noting that: these bacteria actually outnumber the cells in our bodies by a substantial amount.

Many plant cell walls cannot be digested, including the special sugars located in the cellular walls of the cranberry called xyloglucans. However, these xyloglucans find their way into the intestines and gut microbiome. And, it’s these ‘beneficial bacteria’ that then break them down for the creation of various health-supporting compounds and molecules.

A healthy gut microbiome is crucial to immune system vitality

The researchers found that some of the bifidobacteria were able to consume xyloglucans, and they also exhibit a special, atypical metabolism when doing so. They produce formic acid as well as less lactic acid than what is typically secreted by similar compounds.

Ultimately, this kind of research brings hope that this carbohydrate found in cranberry could eventually become a valuable food additive or supplement. Remember, when the gut microbiome is ‘out-of-whack,’ it can lead to chronic inflammation and disease. So, obviously, we want to eat as many foods as we can (each day) to support our gut health.

Prebiotics could hold the key to overall gut health

Although some research indicates a trend toward focusing on prebiotics, instead of probiotics for gut health. I wouldn’t count out the value of probiotics too quickly – especially in the age of antibiotics.

Probiotics refer to beneficial bacteria added to the gut, prebiotics are already there. Prebiotics help to create essential compounds and molecules in our bodies. They also take care of things we cannot digest, keep pathogens away and assist other beneficial microbes in the body.

The results were published in the journal of Applied and Environmental Microbiology in its “Spotlight” section. The study was funded by the Ocean Spray company as well as the President’s Enhancement Fund at the Graduate School of the University of Massachusetts Amherst.