Ever more official lies from the US government 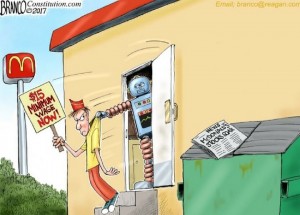 Consider the constant morphing of “the Muslim threat” from al-Qaeda to the Taliban, to al-Nusra, to ISIS to ISIL, to Daesh with a jump to Russia. All of a sudden 16 years of Middle East wars against “terrorists” and “dictators” have become a matter of standing up to Russia, the country most threatened by Muslim terrorism, and the country most capable of wiping the United States and its vassal empire off of the face of the earth.

Domestically, Americans are assured that, thanks to the Federal Reserve’s policy of quantitative easing, that is, flooding the financial markets with newly printed money that has driven up the prices of stocks and bonds, America has enjoyed an economic recovery since June of 2009, which must be one of the longest recoveries in history despite the absence of growth in median real family incomes, despite the growth in real retail sales, despite the falling labor force participation rate, despite the lack of high value-added, high productivity, high wage jobs.

The “recovery” is more than a mystery. It is a miracle. It exists only on fake newspaper.

According to CNN, an unreliable source for sure, Jennifer Tescher, president and CEO of the Center for Financial Services Innovation, reports that about half of Americans report that their living expenses are equal to or exceed their incomes. Among those aged 18 to 25 burdened by student loans, 54% say their debts are equal to or exceed their incomes. This means that half of the US population has ZERO discretionary income. So what is driving the recovery?

Nothing. For half or more of the US population there is no discretionary income there with which to drive the economy.

The older part of the population has no discretionary income either. For a decade there has been essentially zero interest on the savings of the elderly, and if you believe John Williams of shadowstats.com, which I do, the real interest rates have been zero and even negative as inflation is measured in a way designed to prevent Social Security cost of living adjustments.

In other words, the American economy has been living on the shrinkage of the savings and living standards of its population.

Last Friday’s employment report is just another lie from the government. The report says that the unemployment rate is 4.4% and that June employment increased by 222,000 jobs. A rosy picture. But as I have just demonstrated, there are no fundamentals to support it. It is just another US government lie like Saddam Hussein’s weapons of mass destruction, Assad’s use of chemical weapons against his own people, Russian invasion of Ukraine, and so forth and so on.

The rosy unemployment picture is totally contrived. The unemployment rate is 4.4% because discouraged workers who have not searched for a job in the past four weeks are not counted as unemployed.

The BLS has a second measure of unemployment, known as U6, which is seldom reported by the presstitute financial media. According to this official measure the US unemployment rate is about double the reported rate.

Why? the U6 rate counts discouraged workers who have been discouraged for less than one year.

John Williams counts the long term discouraged workers (discouraged for more than one year) who formerly (before “reforms”) were counted officially. When the long term discouraged are counted, the US unemployment rate is in the 22-23 percent range. This is borne out by the clear fact that the labor force participation rate has been falling throughout the alleged “recovery.” Normally, labor force participation rates rise during economic recoveries.

It is an extraordinary thing that although the US government itself reports that if even a small part of discouraged workers are counted as unemployed the unemployment rate is 8.6%, the presstitute financial media, a collection of professional liars, still reports, in the face of the government’s admission, that the unemployment rate as 4.4%.

Now, let’s do what I have done month after month year after year. Let’s look at the jobs that the BLS alleges are being created. Remember, most of these alleged jobs are the product of the birth/death model that adds by assumption alone about 100,000 jobs per month. In other words, these jobs come out of a model, not from reality.

Where are these reported jobs? They are where they always are in lowly paid domestic services. Health care and social assistance, about half of which is “ambulatory health care services,” provided 59,000 jobs. Leisure and hospitality provided 36,000 jobs of which 29,300 consist of waitresses and bartenders. Local government rose by 35,000. Manufacturing, once the backbone of the US economy, provided a measly 1,000 jobs.

As I have emphasized for a decade or two, the US is devolving into a third world workforce where the only employment available is in lowly paid domestic service jobs that cannot be offshored and that do not pay enough to provide an independent existence. This is why 50% of 25-year olds live at home with their parents and why there are more Americans aged 24-34 living with parents than living independently.

This is not the economic profile of a “superpower” that the idiot neoconservatives claim the US to be. The American economy that offshoring corporations and financialization have created is incapable of supporting the enormous US debt burden. It is only a matter of time and circumstance.

I doubt that the United States can continue in the ranks of a first world economy. Americans have sat there sucking their thumbs while their “leaders” destroyed them.