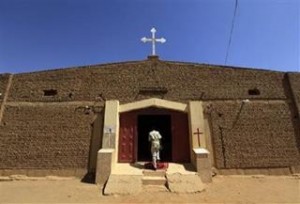 JUBA, SOUTH SUDAN (ANS) – Since 2012, Sudan has expelled foreign Christians and bulldozed church buildings on the pretext that they belonged to South Sudanese.

Besides raiding Christian bookstores and arresting Christians, authorities threatened to kill South Sudanese Christians who do not leave or cooperate with them in their effort to find other Christians.

Sudan fought a civil war with the south Sudanese from 1983 to 2005, and in June 2011, shortly before the secession of South Sudan the following month, the government began fighting a rebel group in the Nuba Mountains that has its roots in South Sudan.

Due to its treatment of Christians and other human rights violations, Sudan has been designated a Country of Particular Concern by the U.S. State Department since 1999, and the U.S. Commission on International Religious Freedom recommended the country remain on the list in its 2017 report.

Now, an Islamist judge in Sudan has upheld the eviction of two pastors from their church-owned homes while 60 other Christians have been summoned to court over their refusal to relinquish property.

In what Christians in Sudan believe is a campaign to take over church property, Adam ruled that Muslim businessman Hisham Hamad Al-Neel should take over the houses.

“All appeals presented are rejected, and implantation of court order should continue,” the court order read.

Morning Star News said the two pastors and their families remain homeless since police raided their houses on Aug. 15 and evicted them. Pastor Abdalla has two children, ages 8 and 10, and Pastor Nalu has a 1-year-old boy. The SPEC leaders have presented another appeal to the high court, and a ruling is expected before the end of the year.

More than 60 church leaders are facing charges in various courts in Khartoum for refusal to hand over church lands and estates to Al-Neel, sources said. A group of 25 SPEC leaders on Nov. 28 appeared in a court in Omdurman, across the Nile River from Khartoum, after Al-Neel accused them of refusing to hand over church property that he claimed to own, they said.

According to Morning Star News, citing a source who requested anonymity, Al-Neel — a Muslim businessman behind nearly all the cases filed to obtain church property — is attempting to take over SPEC properties in Khartoum and Khartoum Bahri (Khartoum North), the source told Morning Star News.

“Almost all the cases were opened by Hisham,” the source said.

The judge rejected the petition of the two evicted SPEC pastors even though the Aug. 15 eviction order referred to another house, No. 567, rather than that of one of the pastors, No. 772, a source said. The order does not name the occupants to be evicted, only the properties.

SPEC leaders said they believe the ruling could result in the imminent demolition of at least one of the church-owned houses.

“We need prayers from everyone,” Pastor Nalu said.

Among those on trial over SPEC properties is church elder Yohanna Tia, who appeared at a hearing on Nov. 28 after he was accused of attacking someone during an April raid by police and a mob on an evangelical school. Al-Neel also opened that case.

Harassment, arrests and persecution of Christians have intensified since the secession of South Sudan in July 2011. The Sudanese Minister of Guidance and Endowments announced in April 2013 that no new licenses would be granted for building new churches in Sudan, citing a decrease in the South Sudanese population.