Exclusive Report From 2019 March For Life: What The Media Doesn’t Want You To Know 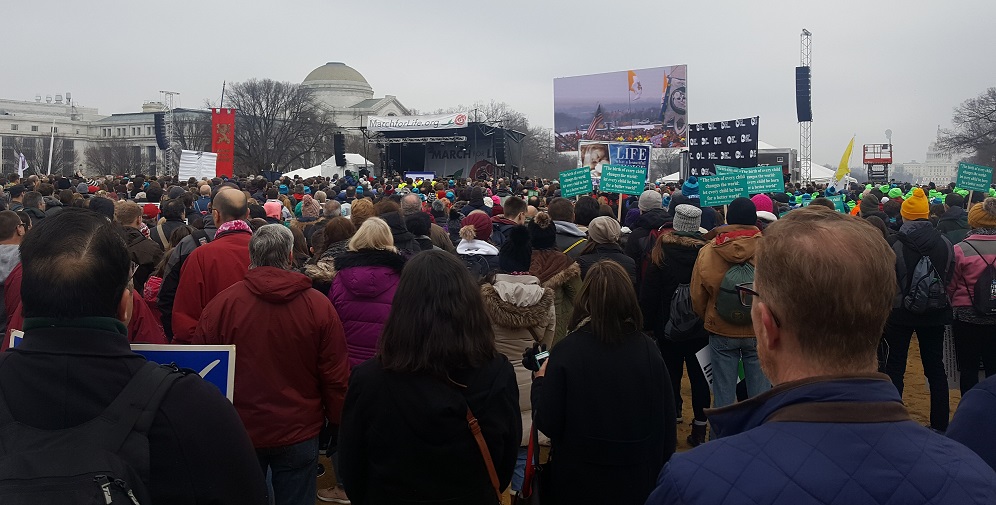 The mainstream fake news media refused to cover the largest pro-life event of the year, but Mommy Underground was there on the ground, and you won’t believe what we saw.

It’s reported approximately 300,000 people gathered in Washington, D.C. at the 2019 March for Life, and chants of “Roe v. Wade Has Got To Go!” were heard all the way from the National Mall down to the Supreme Court.

The March for Life kicked off with a pre-rally, where conservative hero Ben Shapiro pumped up the crowd before a surprise live visit from Vice President Mike Pence! Vice President Mike Pence showed his love and support for the pro-life movement by taking it back to God’s view on life and spoke on the importance of protecting innocent babies in the womb. A videotaped message from President Donald Trump also played for the crowd and Trump vowed to reject pro-choice legislation that could be put forth by the Dems.

Prayers for life echoed through the loudspeakers, as pro-lifers prepared to take on D.C. And after the rally, hundreds of thousands of pro-lifers took their pumped-up energy and began to march down the streets of Washington, D.C.

Some pro-choice folks observed the march from the sidewalks and shook their heads in disgust as the pro-lifers began their journey to the Supreme Court. But that didn’t stop or discourage attendees from boldly marching on with their signs in hand, determined to take a stand for life. 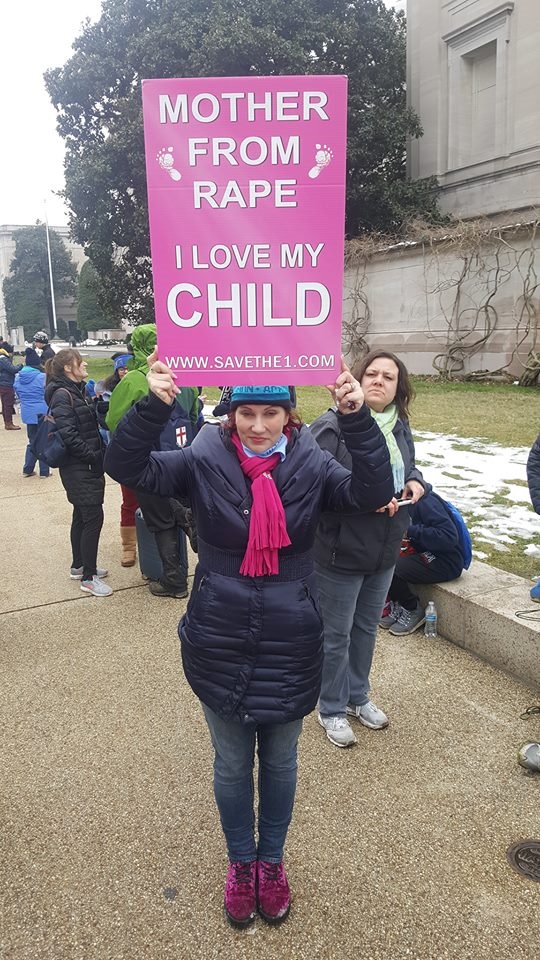 Jennifer Christie was among those who marched, as she clutched a sign that read “Mother From Rape, I Love My Child.” Jennifer is a young Christian mom, who was brutally raped on a business trip. As a result of the rape, she became pregnant and decided not only to carry her child but to actually raise her baby. She is often attacked by vulgar pro-choice activists and criticized for speaking out against abortion.

I interviewed Jennifer and asked her to share her story and thoughts on abortion, and she admitted while she used to believe abortion in cases of rape was “compassionate”, once she became “that woman”, everything changed.

Touched by her honesty and willingness to share, I asked her to share one thing she’s always wanted to say to women who question her passion to advocate for the unborn. Jennifer replied:

“The notion of violent trauma being somehow healed by further violent trauma was ridiculous. Being told restoration would be found through destruction? Lies. I thought maybe I was (an) anomaly. Maybe there was something strange about the way I felt fiercely protective of my child from the start. I wasn’t. There wasn’t. The vast majority of women who conceive in rape feel this way. Our children give us a light to look to when our world is darker than it has ever been.

“My son didn’t even exist at the time I was attacked. Why should he pay with his life for the evil of another?

“I speak not only for me, but for the hundreds of mothers who I know who have conceived in rape, my beloved friends who themselves were conceived through brutality. I speak for the women who I have held as they weep over their abortions. The wound of their assault now tolerable but the loss of their child never so.”

Wow. Talk about walking the walk. Jennifer’s fierce motherly instinct to protect her son, and her willingness to talk about her own trauma in order to advocate for other unborn babies was truly inspirational.

As I looked at the sea of people marching for life, I felt a sense of peace and unity. I knew that those of us who marched on behalf of innocent babies were marching on the right side of history. Not only did young mothers like Jennifer Christie march, but there were children, babies, and families. Even men marched alongside their wives, sisters, and friends, all standing together advocating for those who couldn’t speak for themselves.

While marching, I came across a large jumbotron in the middle of the street, with a man standing near it. I approached him and learned his name was Jimmy Balta who represented a group called 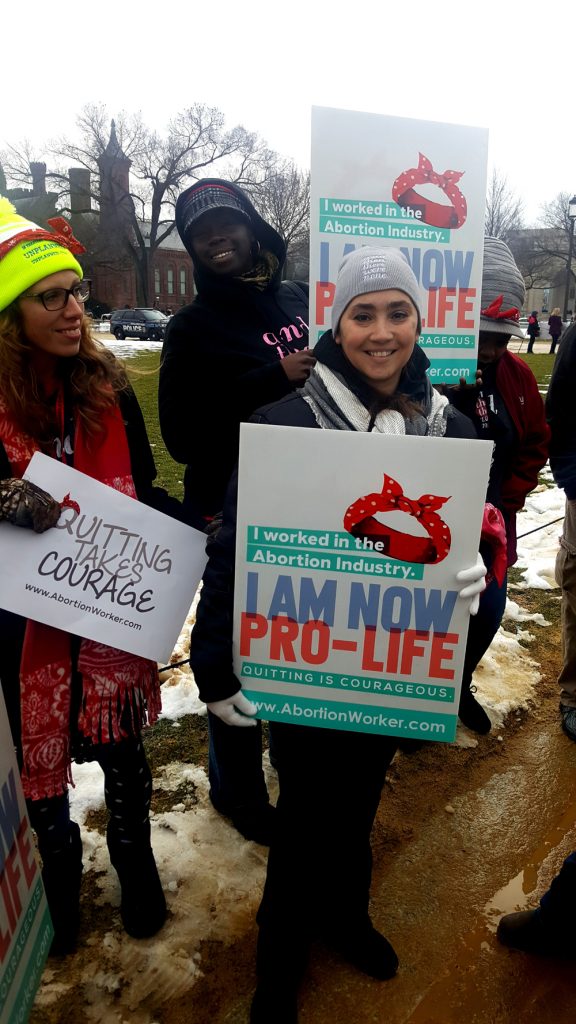 Preborn Children. I asked him to describe his organization, who they are and why they are at the march and Jimmy replied:

“At prebornchildren.com we believe in showing healthy pre-natal photos, human embryology to tug at the heart strings, we think that’s more effective than showing the bloody graphic images. We’re 100 percent pro-life, we believe in dealing with the hard cases, and we believe that we can abolish abortion through the Supreme Court. So, we’re very upset with the Republican establishment, obviously we don’t vote Democrat, but we believe the Republican establishment is also pro-choice.”

As pro-life woman myself, it was encouraging to see men like Jimmy standing in solidarity!  And as I continued to march down the streets of D.C. with hundreds of thousands of others in the pro-life movement, I couldn’t help but admire the courage of those who marched. Some women were post-abortive and were holding signs that read “I regret my abortion.” Others called themselves pro-life feminists. There were those who worked in the abortion industry, who became pro-life and left it all behind. Others were conceived in rape and marched for those babies who never made it out of the womb alive.

Pro-aborts want you to believe the lie that the pro-life movement is dead. The fake news outlets have no problem covering the “Women’s March”, full of vulgar pro-abortion women advocating for the slaughter of unborn babies.

They try and spin pro-lifers into “privileged women” who have never experienced trauma or hardships and therefore have a skewed view on why some women choose abortion. But nothing could be further from the truth.

In fact, I met up with another pro-lifer Darlene who shattered the stereotype that pro-lifers have never experienced trauma. I started talking with Darlene and asked her why she traveled all the way from New Hampshire to the march. Darlene admitted she was previously a victim of child sex-trafficking, and while she was trafficked, she became pregnant. She hopes sharing her story will encourage other women that they are not alone. I asked permission to share her story, and she said: 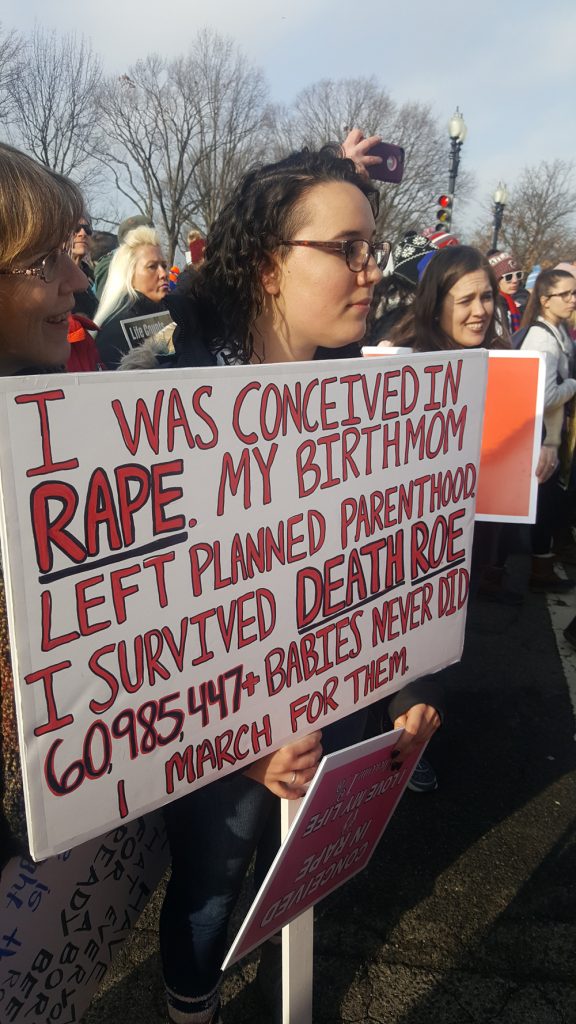 “My mom was 15 years old the first time he raped her. When she found that she was pregnant with me, she says that we were in it together. She saw me as a person immediately. The unfortunate thing is that she married him, thinking it would be ok, but he was a serial abuser.

“Early childhood sexual abuse left me vulnerable. I am also a juvenile sex trafficking survivor. Saving my baby saved my life. I escaped my trafficker with the help of pro-life people.

“Attending the March for Life and speaking about my experience is one way I hope to help prevent others from experiencing the kind of deprivations that I suffered. The baby is never the aggressor. Sexual violence is traumatic, but adding the trauma of abortion will never un-rape a woman and will only serve to hurt her more by robbing her of her maternity. She is a mom already, if she is pregnant. I hope my witness will help moms protect their tiny children.”

Truly, this woman was amazing, and her courage to speak up was even more incredible. Darlene is an example of how God can restore the years the locusts have eaten.

But it wasn’t just people from America who were in attendance. I met another girl marching beside me named Carla Sara Quinn and learned she actually lived in Ireland and flew all the way to Washington to D.C. to march for life!

I told her I was amazed she came all this way and expressed my sympathy on the recent vote to legalize abortion in Ireland. But I was curious to know what would make her come all the way to America to partake in this pro-life march.

Carla sadly admitted the pro-life movement was so splintered in Ireland, she needed to gain strength from the movement here in America. After we finished marching together, I asked her what she thought about the March for Life and she replied:

“Overwhelming, is the only word I can describe. It was just… like a tidal wave, like beyond a tidal wave. It was just an incredible thing to witness… it just never ended… it went on for so long, and it just did my soul good to see the cohesion… the team effort… it was a total team effort… it was just wonderful to see just the size of it… it was just incredible to see, and I’m just so delighted, and it was worth everything to get here just to witness this because you don’t see that every day.”

What an amazing gift that American pro-lifers were able to encourage a gal all the way from Ireland! It’s comforting to know despite our shortcomings, America is still a beacon of light to a dying 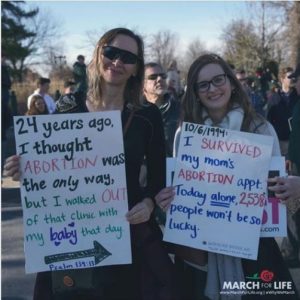 world. So fellow pro-lifers, be encouraged! The pro-life movement is not dead. And with President Trump and Vice President Mike Pence agreeing to stand for life, things can only begin to look up.

But the battle to end abortion is an uphill task. The darkness of Roe v. Wade is still real, and millions of babies have been slaughtered since abortion became legal. Pro-lifers must stand vigilant, and only vote for politicians who pledge to be 100 percent pro-life without compromise. And then, those that vote the wrong way must be voted out of office.

Let’s continue to pray for a day when abortion is no longer an option, and every baby has the chance at life. But until then, we will march.