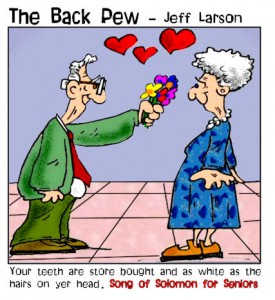 Little Johnny asked his Grandma how old she was.

Johnny thought about that and then asked: “And how old would you be if you let go?

Actual bloopers from the files of a doctor’s office where his wife works:

~ When he stands he needs assistance to stay on his face. ~ She had been drinking but still couldn’t drive.

~ He is a retired trunk driver. ~ Patient denies swallowing or chewing. ~ Parent died in old cage of unknown cause.

~ He denies any use of drugs or sexual activity outside of the home. ~ Patient has a headache. Says she had no head before. ~ The patient does not smoke alcohol. ~ She states she has GOK “God Only Knows.” ~ Patient has no idea where her limbs are. ~ Patient is a retired forearm.

The Slip of Words

A minister and lawyer were chatting at a party. “What do you do if you make a mistake on a case?” the minister asked. “Try to fix it if it’s big; ignore it if it’s insignificant,” replied the lawyer. “What do you do?” The minister replied, “Oh, more or less the same. Let me give you an example. The other day I meant to say ‘the devil is the father of liars,’ but instead I said ‘the devil is the father of lawyers,’ so I let it go.”

A guy bursts into a flower shop. Guy (urgently): “I need two potted geraniums!” Clerk: “Sorry, we don’t have any potted geraniums. Could you use African violets instead?” Guy (sadly): “No, it was geraniums my wife told me to water while she was gone.”

I am 38 years old and I have so many unanswered questions… I still haven’t found out who let the dogs out…where’s the beef…how to get to Sesame Street…why Dora doesn’t just use Google Maps…why do all flavors of fruit loops taste exactly the same…how many licks it takes to get to the center of a tootsie pop…why eggs are packaged in a flimsy paper carton, but batteries are secured in plastic that’s tough as nails, yet light bulbs too are in a flimsy carton… Ever buy scissors? You need scissors to cut into the packaging of scissors…I still don’t understand why there is Braille on drive-up ATM’s or why “abbreviated” is such a long word; or why is there a D in ‘fridge’ but not in refrigerator… Why lemon juice is made with artificial flavor yet dishwashing liquid is made with real lemons…Why they sterilize the needle for lethal injections…And, why do you have to “put your two cents in” but it’s only a “penny for your thoughts” – where’s that extra penny going… Why do The Alphabet Song and Twinkle Twinkle Little Star have the same tune…Why did you just try to sing those two previous songs…And just what is Victoria’s secret?…and what would you do for a Klondike bar – you know as soon as you bite into it, it falls apart…and why do we drive on parkways and park on driveways?

Three churches in town were overrun with squirrels. After much prayer, the elders of the first church determined that the animals were predestined to be there. Who were they to interfere with God’s will?  They did nothing, and the squirrels multiplied. The elders of the second church, deciding that they should not harm any of God’s creatures, humanely trapped the squirrels and then set them free outside of town.  Three days later the squirrels were back.

The third church succeeded in solving the squirrel problem. The elders simply baptized the squirrels and registered them as members of the church.  Now they only see the squirrels on Christmas and Easter.

Goodbye seems so final – seven letters in a row,

“Bye for now” feels better – this I do know.

When parting ways from this earth or simply for the day,

Bye for now is comforting – that I must say.

Bye for now provides a chance to meet again somehow,

To give or get another hug – that time, it will allow.

Bye for now offers hope to all the ones we love,

That simple phrase might be a gift directly from above.

Days can feel oh so long, but years are short indeed,

Ask anyone who’s lost a love – “Just one more day,” we plead.

All the memories in our hearts, tucked away, we keep,

Special ones leave a mark, one that’s surely deep.

So, let’s not say goodbye.  Let’s change the way we part,

Whether it is in a text, long e-mail, or note,

Let it be remembered – bye for now is what we wrote.

Or when our time on earth has met its final date,

It’s bye for now, not goodbye – see you at The Gate!

Thoughts For the Day:

I got a job in a workout center, but they said I wasn’t fit for the job. ~ I got a job as a historian, until I realized there was no future in it. ~ The grace of God is the mending glue for broken hearts. ~ Managed to get a good job working for a pool maintenance company, but the work was just too draining. ~ I became a professional fisherman, but discovered I couldn’t live on my net income. ~ I studied a long time to become a doctor, but didn’t have any patience. ~ I tried to be a musician, but eventually found I wasn’t noteworthy. ~ I used to work in the woods as a lumberjack, but just couldn’t hack it, so they gave me the axe. ~ I tried working in a muffler factory, but that was too exhausting. ~ I tried being a chef – figured it would add a little spice to my life, but just didn’t have the thyme. ~

Success is when you look back at your life and the memories make you smile.

1: What was the name of Abraham’s wife? Rachel – Sarah – Rebekah – Leah

3: Which of his wives did Jacob love the most? Leah – Zilpah – Rachel – Bilhah

4: What happened to Shechem the prince who fell in love with Dinah, daughter of Jacob? He married Dinah – He, his father, and the men of his city were slain by Dinah’s brothers – He invited Dinah’s family to live in his city –     He eloped with Dinah, who never saw her family again

5: Where did Moses meet his future wife? At a well in the land of Midian – In Pharaoh’s palace in the land of Egypt –     In the wilderness on the journey to the promised land – At the house of one of the Israelites

7: What was the name of Ruth’s second husband? Elimelech – Mahlon – Chilion – Boaz

8: Samson loved Delilah so much that she persuaded him to tell her what? The secret of his strength – Where the Ark of God was – How to defeat the Israelites – How many Philistines he had killed

9: What was the name of Abigail’s first husband? Goliath – Uzzah – Joash – Nabal

10: What convinced David he was in love with Bathsheba, to the extent that he was prepared to commit adultery?

11: Who did Amnon love, and then hate even more than he had loved her? Dinah – Tamar – Leah – Abigail

12: Who told his wife not to worry that she was barren and said, “am not I better to thee than ten sons”? Abraham –     Jacob – Elkanah – Manoah

13: In the love poetry in Song of Solomon how is the lady’s hair described? As a rushing waterfall – As a stream of silver – As a bed of lilies – As a flock of goats

14: What was the occupation of Hosea’s wife?  Housekeeper – Dyer of cloth – Harlot – Money lender

16: Which married couple did Paul become friends with at Corinth? Ananias and Sapphira – Aquila and Priscilla –     Jason and Lydia – Peter and Mary

19: How does Paul describe marriage in Hebrews? Loving – Perfect – A gift – Honourable