A Teacher of the Year at a Florida middle school posted a Facebook message that has since gone viral saying parents need to “step up” when it comes to their kids’ behavior. 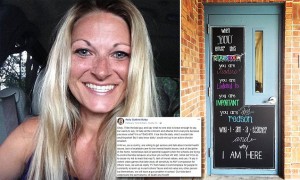 “Okay, I’ll be the bad guy and say what no one else is brave enough to say, but wants to say,” Kelly Guthrie Raley, who was named Eustis Middle School Teacher of the Year 2017-2018 last month, said in a now-viral Facebook post following the mass shooting that killed 17 at Marjory Stoneman Douglas High School.

Raley said she’ll “take all the criticism and attacks” for her opinion because, as a teacher with two decades of experience, she has to worry about an active-shooter situation on a daily basis. The middle school teacher said over her almost two decades as an educator that she’s seen an increase in violence and a lack of compassion among students.

“Until we, as a country, are willing to get serious and talk about mental health issues, lack of available care for the mental health issues, lack of discipline in the home, horrendous lack of parental support when the schools are trying to control horrible behavior at school (oh no! Not MY KID. What did YOU do to cause my kid to react that way?), lack of moral values, and yes, I’ll say it – violent video games that take away all sensitivity to ANY compassion for others’ lives – as well as reality TV that makes it commonplace for people to constantly scream up in each others’ faces and not value any other person but themselves, we will have a gun problem in school,” the sixth-grade language arts teacher wrote.Raley, who loves hunting and four-wheeling in her spare time, added that she grew up with guns in her home. “But you know what? My parents NEVER supported any bad behavior from me,” Raley said.

She said when she began teaching 20 years ago, she never had to worry about calling a student’s parents and getting cussed out, told to go to hell, or threatened with a public shaming all because she was calling out their child’s behavior. Something, she said, has got to change.

“Parents, it’s time to step up!” Raley urges. “Be the parent that actually gives a crap! Be the annoying mom that pries and knows what your kid is doing. STOP being their friend. They have enough ‘friends’ at school. Be their parent. Being the ‘cool mom’ means not a damn thing when either your kid is dead or your kid kills other people because they were allowed to have their space and privacy in YOUR HOME.”

She doubles down that she had guns in her home. “But you know what? I never dreamed of shooting anyone with those guns. I never dreamed of taking one! I was taught respect for human life, compassion, rules, common decency, and most of all, I was taught that until I moved out, my life and bedroom wasn’t mine…it was theirs. And they were going to know what was happening because they loved me and wanted the best for me.”

Raley concludes her post by adding that she never brought up gun control. “This post wasn’t about gun control,” she said. “This was me, loving the crap out of people and wanting the best for them. This was about my school babies and knowing that God created each one for greatness, and just wanting them to reach their futures.”

Raley said the only thing she holds dearer than teaching students is her faith and family, and that her father, a military hero, and her mother, a retired school teacher, inspired her to be who she is today.