By Tom Perry and Suleiman Al-Khalidi

(Reuters -BEIRUT/AMMAN) On the eve of Donald Trump’s election victory, members of a Western-backed Syrian rebel group met U.S. officials to ask about the outlook for arms shipments they have received to fight President Bashar al-Assad.

They were told the program would continue until the end of the year, but anything more would depend on the next U.S. administration, a rebel official at the meeting said. When Trump takes office in January, it may stop altogether.

The president-elect has signaled opposition to U.S. support for the rebels, and an overhaul of policy on Syria.

The military aid program overseen by the Central Intelligence Agency has given arms and training to moderate rebels in coordination with Turkey, Saudi Arabia, Qatar, Jordan and others. It helped to support these rebels, fighting under the Free Syrian Army banner, as jihadist groups linked to al Qaeda emerged as a major force in a war approaching its sixth anniversary. 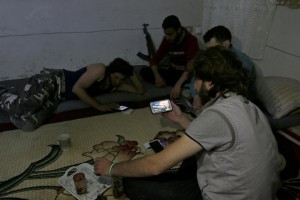 U.S. officials declined to comment on any meetings with rebel groups, and previously have not commented on the CIA program given its covert nature. But Trump has indicated he could abandon the rebels to focus on fighting Islamic State which control territory in eastern and central Syria. He might even cooperate against IS with Russia, Assad’s most powerful ally, which has been bombing the rebels for over a year in western Syria.

Assad, in an interview published on Tuesday, said Trump would be a “natural ally” if he decides to “fight the terrorists”. The rebels are looking on the bright side. They say support via the U.S.-backed program has been inadequate and Washington has stopped Saudi Arabia from giving them more powerful weapons.

So the rebels hope a more isolationist United States will give regional states a free hand, allowing Saudi Arabia to provide the anti-aircraft missiles President Barack Obama has vetoed.