Fork in the Crick 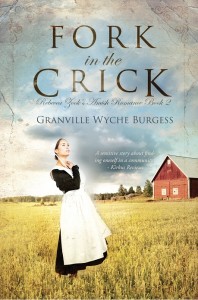 I’d like to introduce you to Granville Wyche Burgess, a prominent American playwright who is the author of Rebecca Zook’s Amish Romance, an acclaimed trilogy set in Lancaster, Pennsylvania, published by Chickadee Prince Books. Granville lives in Connecticut with his Amish-Mennonite wife, and this story is very personal for him.

In a recent interview Mr. Burgess said, “My wife, Reba Beeson, was raised on an Amish farm in Lancaster County, a farm we still visit at least once a month. In marrying outside her faith, Reba had to confront certain “challenges” from her family, and a few years ago her cousin Howard suggested we write up these challenges as a series of humorous family anecdotes. The stories just naturally morphed into an Amish romance, and, as we worked, we added a subplot of mystery and danger. The root of the series, however, is definitely autobiographical: a young man from South Carolina, like me, meets and falls in love with an Amish woman and together they struggle to follow their heart’s desire.”

The second book in the trilogy, Fork in the Crick, set for release in September 2018, is a gripping tale of thwarted romance and attempted murder in a peaceful Lancaster community, threaded through with the abiding love that knits the Amish world together like stitching on a well-worn quilt.

The first volume, Stone in the Crick was acclaimed by Kirkus Reviews as a “sensitive story about finding oneself in a community,” and Elizabeth Oberbeck, author of The Dressmaker (Henry Holt & Co.) says, “Like a quilt woven with many dexterous hands, Burgess weaves a page-turner tale of intrigue and romance…. A witty novel, full of humor and intelligence, with memorable characters who feel life-like enough to hug.”

Granville’s musical, Conrack, based on the Pat Conroy memoir The Water Is Wide had a sold-out run at Ford’s Theatre and was attended by President George H.W. Bush and the first lady, Barbara Bush and is frequently revived around the country, most recently this past fall. He has received an Emmy nomination for his work on the CBS soap opera, Capitol. He has also received awards from the CBS/Foundation for the Dramatist Guild, the National Endowment for the Humanities, and the Pennsylvania Council on the Arts.

Fork in the Crook is available for pre-order (along with the first book) in paperback on Amazon, Barnes & Noble or at any bookstore in America.