Time in space gave Glenn an awe of the universe

By Leigh Jones and Ryan McKinnon

Glenn was born July 18, 1921, in Cambridge, Ohio, and grew up in New Concord, Ohio, with the nickname “Bud.” His love of flight was lifelong; his father spoke of the many summer evenings he arrived home to find his son running around the yard with outstretched arms, pretending he was piloting a plane. Last June, at a ceremony renaming the Columbus airport for him, Glenn remembered imploring his parents to take him to that airport to look at planes whenever they passed through the city. 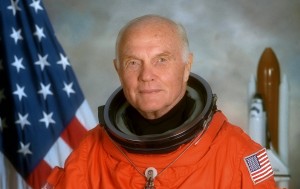 He served as a fighter pilot in two wars—World War II and Korea. He also did a stint as a test pilot, setting a transcontinental speed record.

In 1959, Glenn told Life magazine he was ready for a new adventure.

“Space travel is at the frontier of my profession,” he wrote. “It is going to be accomplished, and I want to be in on it. There is also an element of simple duty involved. I am convinced that I have something to give this project.”

In 1962, Glenn became the first American to orbit Earth, doing three laps around the planet. He quickly became known for a lifestyle unlike that of his fellow astronauts: They drove Corvettes; he drove a beat-up Peugeot. They partied and drag raced on the beach; he worked out, attended church, and snubbed the press. (Reporters desperate for a story followed him to Riverside Presbyterian Church in Cocoa Beach, Fla.)

His time in space left Glenn in awe of the universe.

“I don’t know what you could say about a day in which you have seen four beautiful sunsets,” he said. He returned to a ticker-tape parade in New York City, then ran for public office.

He became a U.S. senator in 1974 and served four terms as a Democrat from Ohio. In 1998, Glenn entered space for a second time and became the oldest astronaut to do so.

The city of Perth, Australia, honored Glenn in both 1962 and 1998 by turning on all the lights of the city as he passed over them while in orbit.

He was the last survivor of the original Mercury 7 astronauts.

Glenn is survived by his wife Annie, whom he married in 1943.

“I’ve been very fortunate to have a lot of great experiences in my life and I’m thankful for them,” he said in 2012.