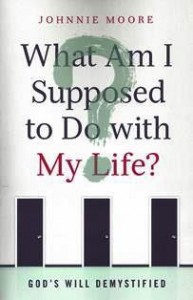 NASHVILLE, TN (ANS) — As the campus pastor of the world’s largest Christian university, Johnnie Moore heard this question more than any other: “What am I supposed to do with my life?”

“This book has been written to expose the lie that God’s will is hard to find, once and for all and to call a new generation of Christians to send the lie to hell-where it belongs,” said Moore.In his aptly titled new book “What Am I Supposed To Do With My Life: God’s Will Demystified” (W Publishing Group / Thomas Nelson, which has just come out, Moore, 31, reveals the secret to finding what so many Christians have struggled with throughout history: God’s will.

According to a news release from the Icon Media Group, Moore was formerly a vice president, spiritual advisor, and professor of religion at Liberty University. He daily interacted with college students who were stupefied when it comes to God’s will for their lives.

They would ask him questions like, “How do they know if the decision they make is God’s will?” and “What if it isn’t?” Moore has good news for Christians of all ages looking to follow God’s plan for their lives — it’s not as hard as it seems to be.

In “What Am I Supposed To Do With My Life ?”, Moore provides spiritual direction and clear guidance on how to discern God’s will, examining God’s successful track record of directing his followers’ paths, specifically that of the Apostle Paul.

While seeking wisdom and direction should always play a part in making major decisions, Moore advocates for a plan of action over a plan of reaction.

“Paul didn’t wait until God showed him where to go; he just went until God stopped him, and that’s the missing key to so many people’s understanding of God’s will,” he says. ” God’s will is more about going till he stops you than waiting until he starts you.”

Little did he know, that he would be asking himself that same question shortly after writing this book on the topic, when he was faced with a major career opportunity-to move cross country and accept a position with Hollywood’s top grossing producer Mark Burnett as his chief of staff.

Johnnie found himself considering the two Biblical principles he discusses in his book:

“What Am I Supposed To Do With My Life?” will empower readers to make the next decision, commit to God’s will for their lives and start living the life God has planned for them.