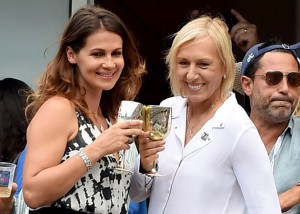 The row over Australian tennis legend-turned-Pentecostal pastor Margaret Court’s outspoken views on gay marriage and efforts by LGBT activists to push transgenderism on children has deepened, with the Rev. Franklin Graham giving her his support after some tennis stars called her views “sick and dangerous.”

Graham wrote in a Facebook post on Thursday that Court, who holds the most career Grand Slam singles titles in tennis, isn’t “afraid to speak the truth about sin.”

“Margaret is exactly right when she said, ‘No amount of legislation or political point-scoring can ever take out of the human heart the knowledge that in the beginning God created them male and female and provided each with a unique sexual function to bring forth new life.’ Sin is a choice, but God’s Word is truth and never changes,” Graham, who is one of the leading conservative Evangelicals in the United States, added.

Court has also claimed that tennis is “full of lesbians,” and argued that allowing children to choose their own gender is the work of the devil.

“The gay lobby is behind that bullying program in schools and children not knowing, whether they are taking out a ‘he’ or a ‘she’ and an ‘it’ and a ‘we’ or ‘they’ and if you feel like being a girl you can dress like a girl. I think, ‘what confusion for a child.’ I get confused talking about it,” Court told Vision Christian Radio earlier this week.

Tennis Australia has said that Court’s opinions are not in keeping with the organization’s values, but has so far resisted calls from LGBT activists that the court named in her honor at Melbourne Park to be renamed.

Martina Navratilova, another retired tennis player and coach, claimed in an open letter that while Court may be an “amazing tennis player,” she is also a “racist and a homophobe.”

“Her vitriol is not just an opinion. She is actively trying to keep LGBT people from getting equal rights (note to Court: we are human beings too). She is demonizing trans kids and trans adults everywhere,” Navratilova argued.

“And now, linking LGBT to Nazis, communists, the devil? This is not OK. This is in fact sick and it is dangerous. Kids will suffer more because of this continuous bashing and stigmatizing of our LGBT community.”

Navratilova, who is married to another woman, also shot back against Court’s reflections that the sport has many lesbian players.

“Now she is doubling down with her ridiculous comments about older women luring young girls on the tour to parties to turn them into lesbians. It’s a good thing she didn’t name anyone as I am pretty sure she would be sued for defamation,” she said.

The row has stirred significant controversy in Australia, where same-sex marriage is not legal, with Prime Minister Malcolm Turnbull also pushing back against calls to have the arena renamed.

“Whatever people may think about Margaret Court’s views about gay marriage … she is one of the all-time greats and the Margaret Court Arena celebrates Margaret Court the tennis player,” Turnbull said on Friday, according to The Guardian.

On her part, the pastor, who leads the Margaret Court of Victory Life Center Church in Perth, insisted that she does not hate gay people.

“[I’ve got] nothing against homosexuals — as individuals, they can do what they want to do. But my belief, as a Christian, is marriage the Bible way and I think it’s sad that these people are using that to try to hit below the belt,” she has said.