Franklin Graham says in order for America to avoid trouble that is on the horizon, Christians need to pray about running for office “where they can have an impact.”

And, by the way, he writes, that doesn’t necessarily mean aligning with the Republican Party, which throughout the years has had a long history of supporting biblical values. Because he’s gone.

“Unless more godly men and women get in this process and change this wicked system,” the chief of Samaritan’s Purse wrote on his Facebook page, “our country is in for trouble.

“I want to challenge Christians, even pastors, across the country to pray about running for office where they can have an impact. We need mayors, [county] commissioners, city council members, school board members who will uphold biblical values.”

He had been referencing the political system in the U.S., and said neither the Democrats nor the Republicans can be looked to for help.

He cited the recent budget approved by House Speaker Paul Ryan, endorsed by the House and Senate and signed by President Obama – more than a trillion dollars of spending. Nowhere does it protect the lives of the unborn, he noted. 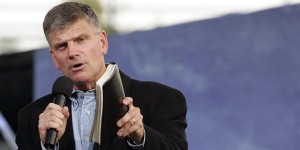 On Facebook, he wrote, “Shame on the Republicans and the Democrats for passing such a wasteful spending bill last week. And to top it off, funding Planned Parenthood! A Huffington Post article called it ‘a big win for Planned Parenthood.’

“I call it a big loss for America. After all of the appalling facts revealed this year about Planned Parenthood, our representatives in Washington had a chance to put a stop to this, but they didn’t. There’s no question – taxpayers should not be paying for abortions! Abortion is murder in God’s eyes. Seeing and hearing Planned Parenthood talk nonchalantly about selling baby parts from aborted fetuses with utter disregard for human life is reminiscent of Joseph Mengele and the Nazi concentration camps! That should’ve been all that was needed to turn off the faucet for their funding.”

He pointed out that he soon will be on a nationwide tour of capitals to have prayer for the nation. “I will begin going state by state to every capital in our nation to hold prayer rallies for our country and share this same challenge on the Decision America Tour. Des Moines, Iowa, is first on January 5. I hope you’ll join me in your capital – check decisionamericatour.com for more dates and details.”

At BizPacReview, a commentary called the vote approving taxpayer money for abortionists at the industry behemoth Planned Parenthood “the final straw.”

The report said, “Graham followed up his thoughts with these tweets: ‘Our representatives in Washington could have stopped Planned Parenthood & taxpayer funded abortion but they didn’t.’”

Jim Hoft at Gateway Pundit added, “Graham made the announcement after the Paul Ryan-Mitch McConnell led Congress passed a ‘wasteful’ trillion dollar spending bill that funds the baby organ harvesters at Planned Parenthood. … We stand with you, Brother Graham!”

The call for Christians to public office has been around for some time. In 2012, Mike Huckabee said Christians need to get more involved in civic life.

“Many (Christians) think they were recruited by the Secret Service instead of giving a bold declaration of the life of the Gospel,” he said at the time.

A few months ago, Ben Carson, the former neurosurgeon who’s risen high in the race for president, told a group of Christians and political activists it’s high time for those of the faith to get in the game and put God back in charge of America.

“It is time to bring God back into our country,” Carson said, Breitbart reported. “Our faith gives us our freedom.”

He made the comments while addressing a crowd of 7,000-plus at the Faith and Freedom Coalition Presidential Candidate Forum moderated by Jack Graham.

“The people are supposed to have a say in how they live,” Carson said, speaking of the power of self-governance.

He also credited God with placing him in his current position of influence, and said he had never set out in life with the goal of running for president.

And a former National Football League player who now is working with the Family Research Council previously called for more Christians to be speaking up as America chooses distinctly anti-Christian paths.

“I just don’t think there’s enough people standing up and being heard who really have thought through the ramifications of being silenced and the slippery slope that that’s on,” he said in an interview with WND/Radio America.

His comments come in light of a number of social movements, including the growing effort to force Christians to accept homosexual “marriage.”

A number of legal cases have been brought against Christians for refusing to advocate same-sex marriage.

It was that issue that got him removed from a job at Fox Sports Southwest. He had openly supported protections for traditional marriage while a candidate for office, and those statements were resurrected by homosexual activists when he got a position with Fox. The network immediately removed him from his post.

“Fox Sports did fire me, and they did issue a statement to the Dallas Morning News that said that my comments and my biblical belief on the definition of marriage would not fly in their HR department,” said James.

He said that even though the “comments” referenced by Fox Sports did not specifically refer to his stand on marriage, it’s clear they were at issue. He said Christians need to be vocal about their beliefs on such issues.

“Here’s what I really am fighting for: the freedom for me to continue to believe as I believe, for every player in that locker room who has a belief system to not fear for having that belief system and to feel like they’ve got to be quiet about it and sheltered.