Franklin Graham: ‘What would you do if you had 20 minutes to live?’ 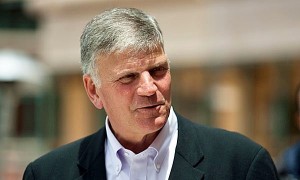 Evangelist Franklin Graham is using Hawaii’s horrifying nuclear scare to ignite a meaningful conversation with Americans about eternity, asking: “What would you do if you only had 20 minutes to live?”

As many news agencies reported recently, a Hawaii state official issued a false warning about an incoming ballistic missile. The alert scared Hawaiians for a full 38 minutes before the state issued a correction.

Fortunately, the missile alert was a false alarm. But a terrorizing experience like that tends to get people thinking – about priorities, about life, even about eternal salvation.

“A friend of mine in Hawaii said he ran to the window to see everyone running off the golf course, and then he sat in front of the television,” said Graham, who is CEO of both the Samaritan’s Purse worldwide ministry and the Billy Graham Evangelistic Association. “I read about another man who got in the bathtub with his family and prayed.”

But after several minutes, the people in Hawaii learned it was a false alarm. “What would you do if you only had 20 minutes to live?” Graham asked.

“Would you call on the name of God?” Graham continued. “Would you ask forgiveness for your sins? Would you contact your loved ones? Would you drink a Coke?” 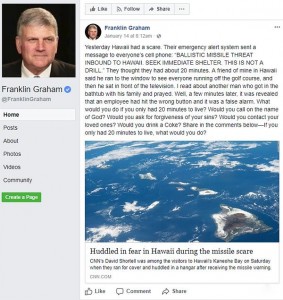 Graham encouraged his Facebook friends to share their thoughts on what they might do in those 20 minutes. The response was near-unanimous. Nearly all respondents said they would immediately begin praying.

Just one day after the scare, a new survey revealed that even one in four atheists and agnostics resort to prayer when they’re faced with a crisis.