(WNS)–A pro-life student group at Fresno State University won its fight this month against a professor who told a student she had no free speech rights on a college campus.

Students for Life sued professor William Gregory Thatcher after he scrubbed out a pro-life message chalked on the sidewalk and told student leader Bernadette Tasy, “College campuses are not free speech areas.”

Tasy, who heads Fresno State Students for Life, got permission from school administrators in May to chalk pro-life messages near the school library. Shortly after she finished her work, a group of students began rubbing out the messages, telling her Thatcher encouraged them to do it. 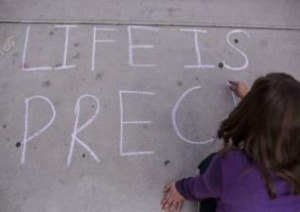 When Thatcher appeared at the scene, he began to lecture Tasy on her free speech rights, telling her she could only talk about her pro-life beliefs in the school’s free speech zone. Turns out, Fresno State eliminated the unconstitutional zone two years ago, and Tasy has the right to say what she wants at school.

Rather than take the lawsuit to court, Thatcher settled last week, agreeing to pay Tasy and another student $1,000 each and take First Amendment training provided by Christian legal group Alliance Defending Freedom (ADF). He also agreed to pay $15,000 in attorney’s fees.

“Today’s college students will be tomorrow’s legislators, judges, educators, and voters,” ADF attorney Casey Mattox said. “That’s why it’s so important that university professors model the First Amendment values they are supposed to be teaching to students, and why it should disturb everyone that this Fresno State professor, like so many other university officials across the country, is communicating to a generation that the Constitution doesn’t matter.”