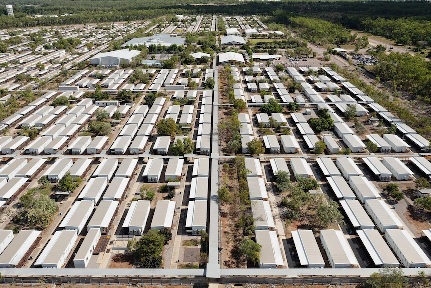 Tired of being locked down and bullied to take the shots that skipped 10 years of testing—and have been shown to injure millions? I am!

In Prague, Czech Republic, citizens took to the streets carrying signs that read “Get vaccinated? Over your dead bodies”—as their government imposed more stringent lockdown measures. In Brussels, Belgium, police sprayed tear gas on 35,000 protesters. In Rotterdam, Netherlands, police shot at least two of the more than 10,000 protesters filling Dutch streets. In Vienna, Austria, officers in paramilitary riot gear arrested protesters who carried “No to Vaccination” signs and compared the current government lockdowns to the Nazi Germany of Hitler’s era.

But none of this quite compares to what is happening in Australia, which is now forcing citizens into COVID internment camps—whether they have COVID or not.

Twenty-six-year-old Hayley Hodson was just freed from one such Australian lockup, and the media in Australia and America is trying to silence her. A neighborhood acquaintance of Hayley’s tested positive for COVID. Police appeared at Hayley’s door and announced that her license plate had been identified as being in the vicinity of the positive test. She would have to go to the internment camp immediately. Hayley and her housemates were informed that once she tested negative, she could come home.

Instead, Hayley was forced into a “COVID cab” (a contracted transport to the internment camps). What Hayley found on her arrival was deeply disturbing for any student of history—row upon row of 2,000 quickly constructed shanty bungalows surrounded by high fences, cameras watching everything and armed guards to keep people from escaping.

Upon arrival, Hayley was informed that no matter what her test results revealed, she would be forced to stay at the “camp” for at least 14 days—longer if she did not comply with their rules. She was dumped in a box of a room, where meals were delivered just once per day. Video footage Hayley secretly taped shows guards telling her that, despite her continued negative test results, she and others were forbidden from moving from their bungalows and balconies to even speak to others interred at the camp. Camp officials even tried to get Hayley to take valium to make her more compliant.

“You feel like you’re in prison. You feel like you’ve done something wrong, it’s inhumane what they’re doing. You are so small, they just overpower you. And you’re literally nothing. It’s like ‘you do what we say, or you’re in trouble. We’ll lock you up for longer,’” Hayley says.

While in the camp, Hayley was informed these camps are being built not only all over Australia but all over the world. Hayley was finally released from internment just over a week ago. But she refuses to remain quiet about what is happening in her homeland, hoping people around the world will wake up.

Hayley says “people are just abiding by the rules and going with the flow, but the flow doesn’t seem to be getting any better. We have hardly any numbers, but they are doing this to us still.” There is no restoration of freedom in sight for Australia, whose citizens chose compliance.

Meanwhile, New York City—the once-shining beacon of freedom to the world—is implementing its own new COVID tyranny. Mayor Bill de Blasio continues to require Vaccine Passports to eat at restaurants or join public events. And just this week, he announced that ALL employers must demand all their employees to vaccinate. No exceptions. Those who choose not to vaccinate will not be allowed to work or go to school.

This new mandate even applies to religious schools! How long, I wonder before NYC builds its own internment camps, perhaps on Rikers Island?

In April 2020, I warned about these vaccine mandates. Now, 20 months later, the evidence has proven the scoffers wrong. The ONLY reason Joe Biden and some governors have not put America on full lockdown is because of the work Liberty Counsel began nearly two years ago. Were it not for our wins at the Supreme Court, churches would still be locked down. And this year, we are leading the fight against illegal shot mandates.

With two cases now before the U.S. Supreme Court, and many others in the pipeline to defend religious freedom, we need your help more than ever. We CANNOT allow what is happening globally to happen here … AGAIN.

The courts, including the U.S. Supreme Court in Korematsu v. United States, allowed and approved the involuntary internment of innocent Americans. Justice would not be served until more than 40 years later when the imprisoned Japanese Americans were given reparations under the Civil Liberties Act of 1988.

Please help Liberty Counsel fight to prevent such unspeakable tyranny from happening in our beloved country once again.