From gang members to followers of Christ

Following the death of two young men killed in gang-related shootings, stunned residents responded with a peace march to stand against gang violence. As the crowd paused for a moment of silence, a former gang member had time to thank God for rescuing him — and 14 members of his family — out of that culture.

“If I did not meet Christ, I would be serving life in jail, or I would be dead,” said Gilbert Gonzalez, 28. “When you’re in that lifestyle, your role models are people who are drug dealers and killers, like Al Capone or people in the mafia.” 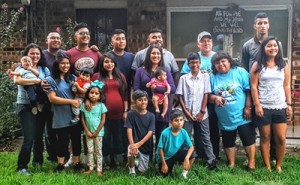 Standing by a Bible verse that says, “As for me and my house, we will serve the Lord,” the Gonzalez family — pictured here Aug. 27 — has traded their elder brother Robert’s home in Springdale (where they used to drink beer every Saturday night) for a place to gather weekly, study the Bible and testify about recent mission trips. The family used to belong to the King Cobra gang until the four brothers, their wives, their parents, two children, their sister, her boyfriend and a father-in-law accepted Christ.

From age 16 to 21, Gonzalez lived a life of drug and alcohol addiction, violence and running from police. His mother and uncles, aunts, cousins and siblings belonged to the King Cobra gang, which originated in California. A move to Springdale meant a new home, but the same old lifestyle. “We became the second-generation gang members,” Gonzalez said.

Finally, Gonzalez had had enough. After a second knife attack, a drive to the hospital to rescue a close family member from a drug overdose, a weariness in having to fight everywhere he went and his drug and alcohol addiction, he had a desire to do what few do — get out of the gang.

In 2013, he and his then-girlfriend and future wife Karen went to church. Two weeks after she got baptized, he got baptized. God then gave him a burden for his family. First, his mother became a Christian and then his father. His older brother Robert, however, would not give up so easily.

“Growing up, I was influenced by gangs and by drugs (the complete opposite of what we are now),” Robert, 30, said. “Then my brother Gilbert — the worst of us — had changed. I saw him being different. He kept talking about Jesus. I said, ‘I don’t want to hear that.’ For a couple of months, we did not even talk.” Robert went to church eventually, he said, just to get his brother, his mom and dad off his back. He accepted Christ. “Gilbert kept on me,” he said, “And I’m glad he did.”

Today, the four Gonzalez brothers and their wives, two of Robert’s children, their sister and her boyfriend are members of First Baptist Church, Fayetteville.

For years — except this past summer when three of the brothers went on an international mission trip — the Gonzalez family has replaced its weekly Saturday night beer parties with Bible study. 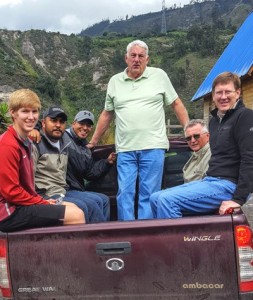 The Gonzalez brothers on a mission trip together in Ecuador.

During an August Bible study, the family discussed the Great Commission at Robert’s house in Springdale. Anthony Gonzalez, 27, a rapper who is working on a Christian CD, spoke about being on stage at a Bible camp in Ecuador.

“God gave me the opportunity to rap in front of 200 or more people; God gave me the confidence,” he said. “It was an awesome experience to rap about the Gospel.”

Sitting to the left of her father, the sister-in-law translated her father’s testimony, “The first day I arrived in prison they talked about God,” he said. “I kept going to gatherings of believers, and two weeks later I accepted Jesus.”

Today, the King Cobra gang remains active in California but not in Springdale because, “Now everyone is a believer.”